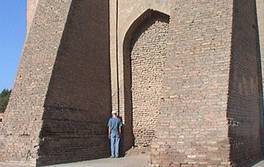 The modern and culturally rich life in Islamic countries from North Africa to Indonesia remains an unknown region for the Western public. With its exhibition series "Worlds of Islam" the Institute for Foreign Cultural Relations afforded a complex image of life in these countries – beyond the images of violence and the stereotypes from The Thousand and One Nights. For the present, the series is completed by "Nafas", designed by Gerhard Haupt and Pat Binder and

Although the selected works testify individual processes of creation, in the exhibition they also serve as examples of artistic positions being taken, and especially questions being asked, by other artists from Islamic countries and regions as well: The relation between the individual and the society, between the individual and the norms and frameworks set by religion and politics, does in many Islamic countries not only determine every day life but the entire social reality. Self-determination and censorship, the strict separation of public and private space, the questioning of traditional values in an urban field subjected to fundamental and rapid changes, are among the themes that numerous artists in the Islamic world are tackling.

In the exhibition, the works will be associated with computer terminals that will provide access to the contents of the online magazine. The visitors thus have the possibility to learn more about the presented works and their authors as well as about other artists from the Islamic world that are concerned with similar subjects or represent comparable artistic conceptions.

The exhibition catalogue is available at the ifa.
www.ifa.de