Nazar - Photographs from the Arab World 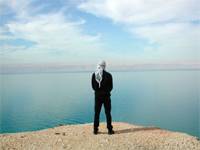 "Nazar" in Arabic invokes sight, contemplation and reflection; looking, delving more deeply, then understanding. And what better way could there be than photography for gaining an insight into the Arab world, which extends from Morocco to Palestine, from Syria to the Yemen? The diversity of cultures and milieus in the whole Arab world is reflected in the large number of different ways of looking. "Dense but deep" presents photographers from Lebanon, Egypt and Palestine, Bahrain and Saudi Arabia, Algeria and Morocco. They give us insights into their world. Work by photographers from Iran, Europe and America places examples of a view "from the outside" alongside the "inside view".

This kaleidoscope questions our Western view of the Arab world, which is currently of value to the media above all because of killings, wars and unresolved conflicts. But unspectacular and continuing political involvement and social changes in various Arab countries do not make media headlines, and are neglected by popular journalism in just the same way as personal experiences and reports.

Whatever the genre: portraits, landscapes or views of towns and cities, reportages or stage photography, whatever the technique: hand prints, digitally manipulated photographs or videos, all the photographers and their work have an unprejudiced, critical view of reality and social commitment in common, even if at first glance they seem to be telling personal, almost private stories.

56 photographers were presented in the Dutch premiere of "Nazar" during the 11th Noorderlicht Photofestival. Wim Melis, curator of "Nazar", the Syrian photographer and curator Issa Touma and the ifa-Galerie Stuttgart have made a selection of 10 Arabic and 4 Western photographers. They do not just offer sights, which – "deep but dense" – conceal and at the same time give a close up view. Thus "deep but dense" also conveys "insights" from and about a world that is in itself very varied and complex.

The extensive English/Arabic catalogue, with 250 pages and numerous illustrations, was published by the Stichting Aurora Borealis in Groningen and is distributed by Idea Books in Amsterdam; it will be on sale at the exhibition at a price of 35 euros; it contains essays by Michket Krifa, Negar Azimi, Issam Nassar, Isolde Brielmaier, Issa Touma, Peter Lewis and Shefira Zuhur, and also brief notes on all the photographers involved.
www.ifa.de