Another Country l Another World 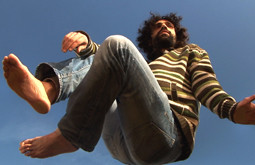 © Jumana Manna
The Song of Ascents, 5-channel-video-installation, 2008
ANOTHER COUNTRY L ANOTHER WORLD

Tea and tulips, paper and porcelain, yoga and algebra were all brought to Europe from other cultures, while one of the most significant steps forward in European science is based on the Indian numbering system – the use of the number zero, which was introduced into Europe by Arabian scholars in the twelfth century. Our use of concepts and ideas from outside Europe, just like goods, technologies, and symbols, is based on transfer between different cultures. Our new exhibition series on Cultural Transfer in the ifa-Galerie in Stuttgart looks at diverse forms and directions in cultural "creolisation". Taking up the documenta exhibition idea of the "migration of forms", we will examine the movement and transnational migration of motifs, and also technologies, strategies and ideas. The Another Country|Eine andere Welt exhibition is curated by Övül Durmuşoğlu, Rave Foundation and Akademie Schloss Solitude scholar. Durmuşoğlu has chosen works by seven artists from the Middle East, Turkey, and North and South America. While Ashley Hunt creates a world map of the movements and new borders of globalisation, working with partners in various locations, Dubravka Sekulić investigates the political background to the European Song Context. Javier Hinojosa examines the uniformity of cities in photo series, drawings and texts, while Matilde Cassani looks at the religious spaces of non-Christian migrants in Europe. Köken Ergun’s video work WEDDING focuses on wedding ceremonies and rituals in one of Berlin's largest Turkish communities. In his installation "Lineal" Cevdet Erek works with abstract and personal series of numbers and periods of time from zero to today, alluding thereby to one of the earliest known transfers of knowledge. Jumana Manna, on the other hand, stages cultural transfer in the medium of video: Pilgrimage Song, a psalm from the Old Testament, is sung by Christians, Jews and Muslims in the Middle East.