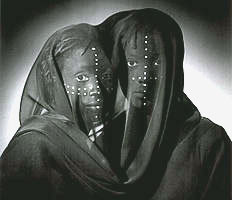 In the series "Spot on...", the ifa-galleries Berlin and Stuttgart present one of the most important cultural events of the African continent for the first time in Germany: the "7th African Encounters of Photography", the world-wide known biennial of photography in Bamako, Mali. One of the most famous African photographers and curators – Akinbode Akinbiyi, co-curator of the Encounters 2007 – has made a photo selection for the ifa-galleries Stuttgart and Berlin. The chosen images give an impression of as well as an insight into the quality and variety of contemporary African photography. At the same time, they pick up the issue of urbanization in a transnational context.
Title and central theme of the Encounters 2007 was "In the City and Beyond". The curator chose for the ifa-Galleries Berlin and Stuttgart eleven African photographers who have dealt with urban and rural structures. What mechanisms contribute to the differentiation between city and countryside? In what aspect do middle zones – especially slums in the periphery of the city – differ from villages? The artists analyse architectural and infrastructural differentiations, but particularly the interpersonal relationships and the various models of community, going today through a radical change because of African urbanisation.
In Berlin and Stuttgart, presentations and panel discussions with selected African photographers will inform about the contemporary cultural scene in different African states. Furthermore, they will allow an easier contact between the African photographers participating in the project and the German colleagues, institutions and intermediaries.
The exhibition is part of the Third European Month of Photography in Berlin 2008.

In co-operation with CULTURESFRANCE, the Ministry for Culture of Mali and the Bamako Biennial of Photography (Rencontres de Bamako)
www.ifa.de