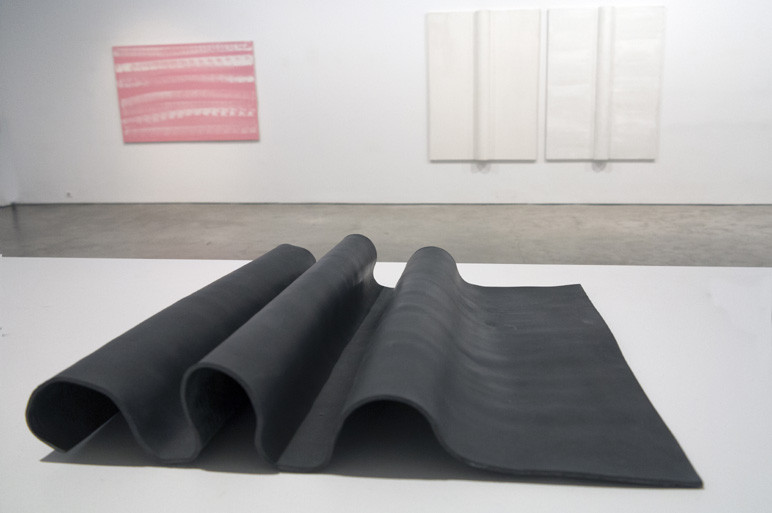 The works of Aliki Sourrapas Zographos collected from her family and presented at the Ileana Tounta Contemporary Art Center are proofs of a vivid, exploratory spirit and of a low profile talent that comes from a certain alertness and attention.

It is impressive, besides the absence from any literature, that Aliki Sourrapas had never exhibited her works, with few exceptions, such as the symbolic participation in the exhibition of the alumni of Moraitis School (Athens, 1994) and the presentation in the Zographos Designs Limited showroom (1972, 150 East 58th St. New York) where she showed her exceptional tapestries that were produced by Swiss company Tisca.

In 1962 she had founded along with other young artists the Coop Art Space in the Plaka area of Athens, Greece. Aliki had just returned from Paris where she studied painting at the School of Fine Arts (1961-1962).

Shortly after, however, in 1963 she moves to New York where she spends the next thirty or so years. There she shares the anti -momentum mood, the questioning of the spirit of any conventional wisdom and knowledge while retaining more moderate approaches: a preference for pure sculptural forms and the kind of space that the condition of canvas isolates. For this space she intensively seeks a kind of need, a pursuit with origins deeply rooted in design.

In 1974 Aliki attends philosophy courses in the progressive New School of New York, a decision that coincides with her creative energy in the art world. From 1972 to 1995, (when the family returns to Greece) Aliki changes various studios in East Village, Tribeca and Soho, the areas where the avant-garde and underground scene was being developed. Aliki works constantly and attends galleries, museums and observes.

The particular kind of “urban abstraction” that someone could recognize in her work seems to be the result of the longtime and careful observation that the artist applies in a range of things which in turn evolve into drawings, paintings, and sculptures.

The most solid body of work is defined by cardboard tubes, used for transporting fabrics, that the artists collects from the street in the fashion district of New York close to her studio. The cardboard tubes are easily transported to her studio, where she cuts them and incorporates them onto her canvases using thick monochromatic layers of oil paint, creating her own composition in a mainly expressive manner. In these works the tubes not only examine the limits of the minimalist and geometrical approach but also introduce into the category of the painted field an element of randomness, the unpredictable with unclear origin and relative duration.

The works of this period are undefined, almost classical ,with grandeur while they resonate while slightly distorting the main modernist principles (which is closely related to husband Nicos Zographos’ concept of the curve in his furniture designs) while hiding, in full view, the most anti – heroic traces of life in a metropolitan city.

In the early 1970’s, Aliki Sourrapas creates the folded canvases, inspired by the ropes and the thick fabrics that cover the rescue boats of the passenger-line ship’ Naias. Additional influences are likely to have been from the lessons of Manzoni or Fontana. The semi – circular cylindrical tubes operate as vital organs of the painted body (veins or bones) that the artist joins in many variations. The artist rearranges areas with the color surface that sometimes do and sometimes do not incorporate (black, white and deep red). These works reveal the interest of Sourrapas for the accumulation and dilution of the material like small sculptural or painting acts that derange space and confirm the paradox of art and of existence.

The introverted fragile mood of Aliki is clear despite her strong social interactions: the small wave-like and flexible sculptures made of lead do not impose themselves in space but merely wrinkle it by not formulating strong bends or cuts (as often seen with her peers working at around the same period) but are rather reminders of time integrating space.

The works of Aliki Sourrapas are consistent encounters with the daring of art in two continents. The works retain conceptual inter-discipline and feverish stylistic deviations, but also fancy a formulated certainty, the psychological foundations of design, a relationship with an articulated space, residential, re-enacted...