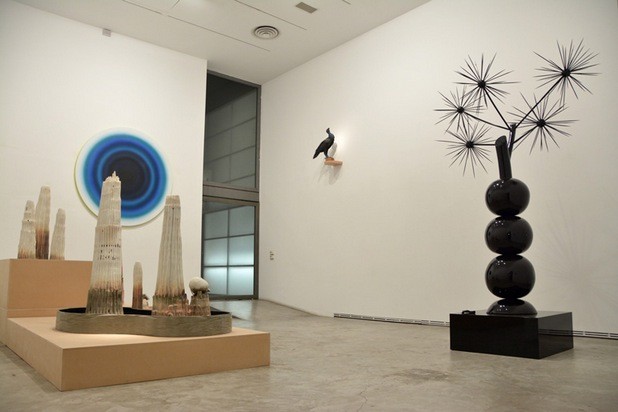 We have art so that we may not perish by the truth. - Friedrich Nietzsche

Christos Delidimos graduated with high honors from the undergraduate and postgraduate program of the Athens School of Fine Arts and also participated in a series of seminar courses in Central Saint Martins College of Art & Design. Since his student years he has presented his work both in Greece and abroad, in numerous exhibitions in galleries, museums and art fairs.

His in situ installation is presented on both floors of the gallery and combines showcases filled with ceramic figures, with painted canvases and large-scale sculptures in the form of animals and primary elements of nature. Christos Delidimos has meticulously planned every single detail of the production and his constant desire to advance and enrich his technique has resulted in a flawless art installation. The impression is of a mythological and metaphysical world, in which man co-exists with nature in a relationship inevitable and menacing at the same time.

In exploring this man-nature relationship through works which remind us of worship objects, through shapes inspired by nature but with an apparent interference of the artist, Christos Delidimos dares to arouse primordial questions about life, but also about the part art plays in it. His totem-like artworks not only evoke ecstasy and fascination, but also a sense of terror, the result of the constant awareness of our own inescapable mortality. As a cure against this fear, Delidimos proposes art as an expression of a brutal expression of a crippling inability, which lies in the fact that whatever we do not know, we imagine it, thus we invent it. Also, let us not forget that imagination is what prevents the spiritual death of the artist and those influenced by his charm.
www.art-tounta.gr