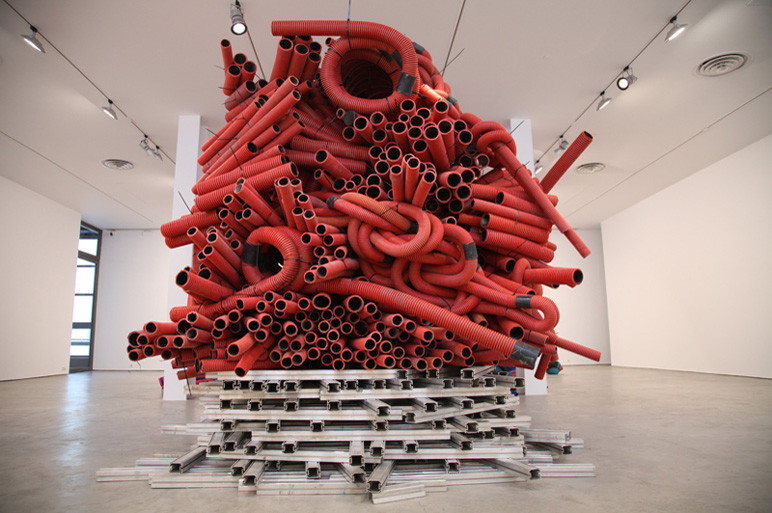 The exhibition is accompanied by a catalogue designed by OTHERMEANS
with a text by Saint Clair Cemin.
“Soul Substitutes I” was presented in March 2014 at Prime Time Gallery, New York.

In her second solo show entitled Lost & Found, Soul Substitutes II, Ioanna Pantazopoulou presents two sculptures that could be perceived as disassembled components of a fantastical kaleidoscope. Through the use of unwanted and discarded materials (that tell a story), the artist explores the way in which waste is mutually proportionate to luxury and how both are dependent on economic wealth and excess production.

The sculpture Explosion Kaleidoscope Monument is composed of hundreds of discarded, unused and pristine motorcycle jackets from the late 1980’s. While initially intended as a successful PR strategy of the specific motorcycle company, the jackets remained for years unused and stored in an abandoned warehouse as the company failed to flourish. They are extensively knotted, weaved and intertwined throughout by connecting, balancing and strapping together specific points, which are determined by preexisting ties and buckles. Pantazopoulou creates a soft three-dimensional Kaleidoscope Monument that employs reflection, repetition, distortion.

The sculptures of Ioanna Pantazopoulou follow the principles of architecture without being trapped in them. They overturn the notion of experience and participation they attempt - through unexpected collisions – to create new connections between the past and the present, of what is lost and found.
www.art-tounta.gr