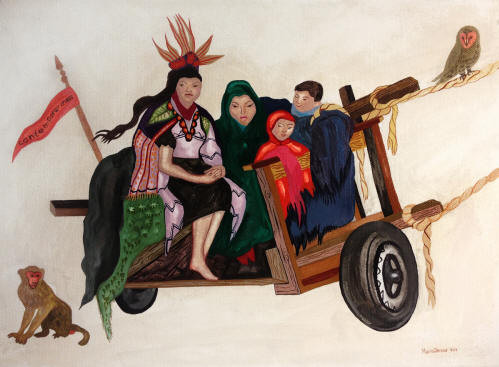 In her new solo Maria Zervos presents 2 new videos and a series of drawings, story-boards of her films, and autonomous paintings in her unique signature and themes.

Maria Zervos constructs a narration through video as an act of reactivating the history/no history of the nomad within multiculturalism and the marriage of different cultures.

In her most recent video Nomadology (Politics of Symbiosis) / 10 min / loop / HD / 2013, Zervos presents images reflecting upon the 17th century’s historic tales and aesthetics. The coexistence of a tribe of Native Americans and English colonists in the New World is presented through Zervos’ poetic video images, in a contemporary visual language connecting strongly iconographic opposites. Zervos’ video offers a rich visual journey from Vermeer’s classic aesthetics to Native American’s most primitive forms of expression.

Maria Zervos uses moving and still images, in her second video piece, Nomadology (The Route) / 4 min / 2012 where she presents a tribe of American Indians, detached from the rest of the world, a video document of an living trace of history. The video’s rhythmic fragility and the ritualistic black and white images, presented in combination with lines of Zervos’ poetry, locate us inside a a tribe’s ceremonial route.

The art works of Maria Zervos often refer to history or myth, creating social criticism despite Zervos’ detailed and vividly poetic morphological portrayal of things. In one of her recent paintings, presented in the exhibition, Structures of Support (The Origin of the Milky Way) / 100 x 70 cm / Watercolor on Canvas / 2012, the artist refers to a Greek myth as it has been illustrated in Tintoretto’s masterpiece. The figures in Zervos’ painting, the Greek goddess Hera and a clown, create postures of similarity and a rhetorical ambiguity as in social criticism and everyday crises.