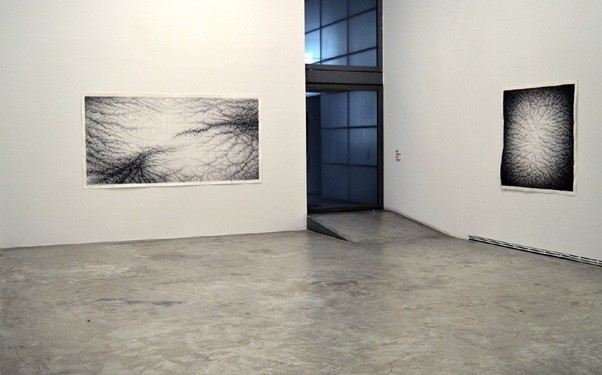 The Ileana Tounta Contemporary Art Center presents Panos Famelis’ second solo show, entitled “Aenima”. His new series of work is constituted by -mostly ink- drawings on paper and it is a study on the inner and biological action of breathing.

An energy flow is produced by this ongoing pulse and results in shaping our uniqueness, as well as in defining our identity and consequently formulating our relationship with the environment. The artist attempts to interpret visually these relationships that pre-exist reasoning, the notions of instinct and physicality from the aspect of being dominant actions and conditions that partially shape our existence.

The repetition of relationships of order and chaos, light and darkness, life and decay, constitutes a natural law and a primary pattern of all the drawings thus creating an accumulation of ink traces on rough paper. The process that the artists follows is based on continual fixed frequencies of moments, points, time and distance that appear on the white surface without following a linear painterly narration.

The “Aenima” exhibition approaches a metaphysical and a cosmological view of our existence influenced from sociological theories. By way of explanation, the subject being approached is that the human entity is closely related to the climate or the bacteria that are located inside and outside of our DNA, meaning that we have a much deeper and defining relationship with Nature, Earth and organisms in their entirety, but also to the macrocosm of the universe.