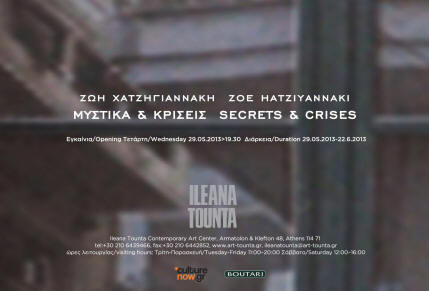 The photographs of Zoe Hatziyannaki’s new series portray buildings in the centre of Athens which accommodate public institutions. In each diptych, the photograph of the building is juxtaposed with an enlarged detail derived from the same photograph. These blurred and secretive images seem to imply what is happening inside those buildings in an attempt to identify possible incriminating evidence hidden behind their straightforward facades. However, nothing is disclosed and only vagueness remains, an idea referring to the park photograph in Antonioni’s movie “Blow-Up” (1966).

As Despina Zefkili remarks on the exhibition’s catalogue, “the impenetrable details of the public buildings do not just remain in the obvious comment of a hopeless demand for transparency but invite us to think more deeply of our own personal need to look behind the facades of the institutions. Just like Antonioni uses the ‘shadow chasing’ park photograph to comment, among others, on the superficiality of the swinging London in the 60’s, so does the escaping detail in Hatziyannaki’s series: through the failure to illuminate the ‘dark side’ of the buildings comments on the general psychology of crisis in Athens today, as well as, on the weakness to comprehend the globalised language of the recession which was enforced rapidly by the media in order to justify the degradation of everyday life with confusing financial terms”