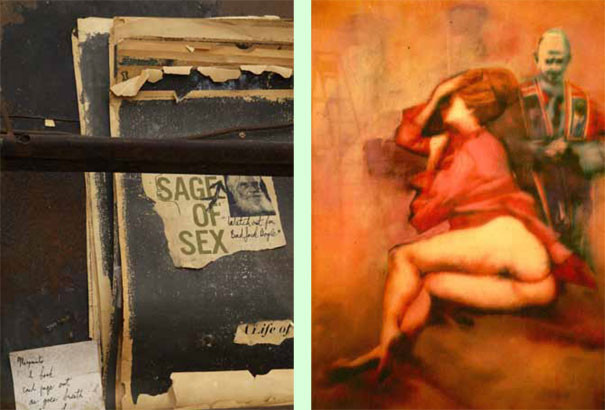 John Altoon was one of the founding fathers of the seminal gallery in Los Angeles known as Ferus Gallery which opened its doors in 1958. Swirling pornography of Hans Bellmer, the social satire (sans the heavy clan imagery), luminosity and ferocious line of Philip Guston, the surrealistic pillow of Roberto Matta, the fascination with contorting genitalia of Lee Lozano, the foot fetishism and fierce application of paint of Georg Baselitz and of course the connected heart to his Armenian brother in arms, Arshile Gorky; this is John Altoon’s world. Altoon is an inward voyeur, however, direct reference to his contemporaries, incidental. Mike Kelly and Paul McCarthy are certainly carriers of his scorching torch. I didn’t know John Altoon. My impressions are a mosaic of words, oral histories and, of course, the astonishing works of art he delivered to the world. Altoon by all accounts was a heart breaker. Charisma oozing from every pore. Ink from a pen. His legendary volatility wreaked chaos on anything and everything in its path. Altoon lived by the adage that without intense pathos there cannot be sublime joy. And those that collided with him seem to have enjoyed both ends of his polarities. The intensity of love for this man seems only rivaled by the intensity of the admiration for his art.
It is a too simplistic read to examine Altoon’s drawings and paintings as the dichotomy between joy and sadness—though the free flowing effortlessness by which ink discharged from his fountain in his “speed drawing” style contrasted against the angst filled reflective slowness that oil painting requires, certainly scratches beneath the surface of indeed, a very layered man.

The first art movement to be birthed in California called assemblage arguably, was the first completely homegrown cannabis of art practices. Don’t fall into the francophile trap of accenting the final «e.»
The original members of this west coast tribe are Bruce Conner, Ed Kienholz, Llyn Foulkes, Wallace Berman, Robert Alexander, the Stone Brothers, Cameron, Jay Defeo, Jess and George Herms.
Then there are the wealthy cousins on the East Coast; Robert Rauschenberg with the «Povera» cousins in Europe, mostly Italy.
A number of other artists from this group also worked in this language of match-making discarded treasures to eachother; specifically Tony Berlant and David Hammons. Their visual diversity has separarted them from association with Funk Art, but nonetheless, the visual poetry of their contribution to making all the world a studio is examined in Infernal Instincts.
These works are giant vessels of nostalgia, not infused in the objects that comprised the works as much as the work slowly decays over time, the eroticism of death and decay shed their skin and from a cocoon springs a moth, a la petite mort—the little death. Orgasm reverberates.Ironically, their sensibility is more routed in jazz and the explosive poetry that began invading the LA and San Francisco scenes in the late 50s. Known as The Beats, this visceral approach to making art is unified by a collective sensibility rather than an aethetic style.
This is where these seeming disparite exhibitions tie together. John Altoon, his cadence of speach, pure Beebop, the grit and rawness of Funk Art dueling together in a battle of the bands, ultimately join the stage together.