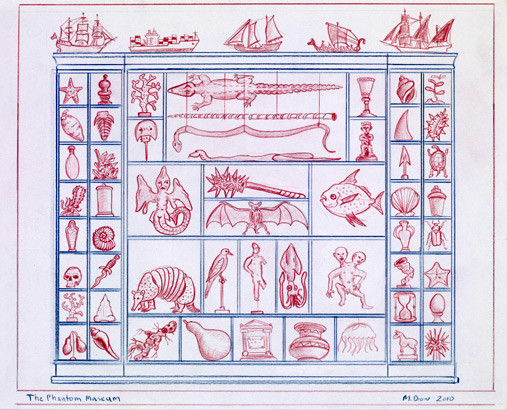 A World for the Spoiling, an exhibition at the In Situ/Fabienne Leclerc gallery, shows mostly new installations by Mark Dion and a large collection of drawings.
The Cabinet of Delight and Ruin — created with Dana Sherwood — is a group of “pastries” presented in a pyramid and exhibited in an art deco glass display. Augmented by this jewel box, the resin replicas in sophisticated forms and attractive colors are made from 19th century jelly molds. A closer look reveals a few inert insects, as if they were trapped by the refined and kitschy sweets. Vanity as a theme, which runs through the history of art, is hereby reinterpreted without use of the human skull, a commonplace to contemporary vanity. What’s more, the work raises the question of tasting and of taste, explores culture and class, savoir-faire and tradition, fact and fake, illusion and the elusive.
Another work, The Phantom Museum, is a curiosity box which is different from earlier ones made by Dion because this piece includes no found objects. Having often collaborated with different archaeology and natural history Museums, the artist regularly borrowed items to include in his art, or them up at flea markets and other secondhand shops. If the curiosity box is a metaphor for and microcosmic portrayal of the museum and its collections — starting with the process of museumification itself — Dion also evokes our own collections of memories of every kind. As its title suggests, The Phantom Museum recalls in another way memory and history: its “things” on display are modeled after engravings from Die geöffnete Raritäten-und Naturalien-Kammer, a work from 1704 attributed to Jacob Marperger*. The author was one of the first to theorize about the idea of a collection, and writes-with illustrations in support — about how to create a wunderkammer, and about what should be included: roots, seashells, coral and rocks are mixed with mammals, reptiles, natural and fake monsters, and other artifacts. Turned into papier-mâché or plastiline and visually united through their bony appearance, the curiosities lose their specificity and become phantoms of themselves. The successive transpositions — from specimen to engraving with Marperger, and from drawing to three dimensional object with Dion — evoke the process of abstraction: the idea replaces the real going from one simulacra to another.

The Shooting Gallery is a sort of hybrid between curiosity box and carnival booth. Either dangerous or edible, the animals portrayed are the ones we hunt — deer, rabbit, duck — or those we want to eliminate, such as rats. Meanwhile the viewer can let out his destructive impulses and test his shooting skills, like Nicky de Saint-Phalle in the early 1960s. As a prize, the stuffed animals recall childhood and the memory of the reassuring softness of toys. Whether the object of research, collection, or desire, the animal world is omnipresent for Dion. With a longstanding interest in the environment, here the artist highlights the contradictions of our affects on and behavior toward the natural world.
Offering attitudes that are especially absurd, such contradictions are at the heart of the work The Sturgeon. One of the oldest species of fish, it is hunted and as we know poached for its eggs, and today nearly extinct. Dion shows the animal mounted on a bed of tar covered in cheap costume jewelry. Like a parable, The Sturgeon raises questions of rarity, value, and their roles in the global economy. This image of wealth metaphorically represents the absurdity, the anachronism, of the hunt for caviar for the privileged few. In a glass casket, the animal is already an artifact from the future, a relic of a society based on shortsighted policies.
Without moralizing and in an indirect way, these works are mirrors that reflect our illusions, beliefs, and a tendency to look toward the past rather than the future. Caught between utopia and disillusion, the entire exhibition is marked by melancholy, but it also reaffirms an art that is lucid, reflexive and deeply engaged.