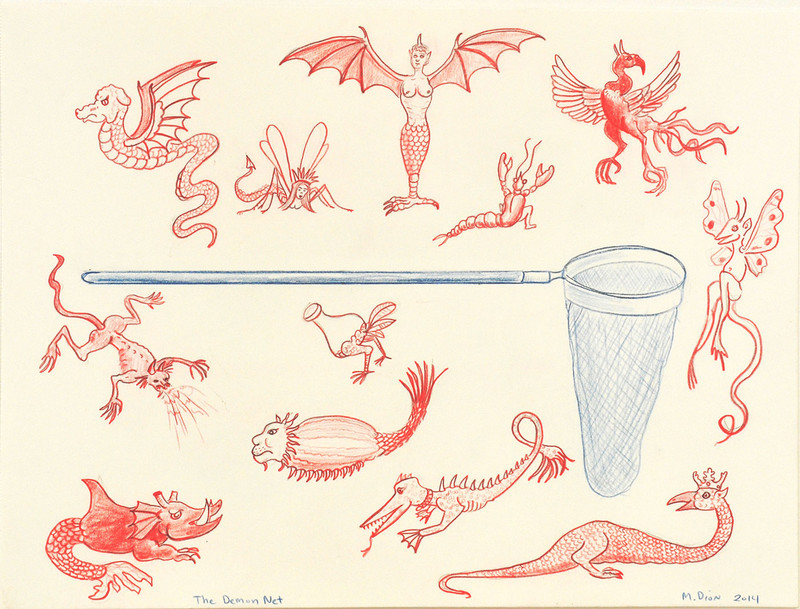 Known for his complex installations inspired by the Wunderkammern and museums, if not scientific laboratories, Mark Dion takes particular interest in the relationship between man and nature through the constructs of knowledge and scientific dissertations produced throughout the ages.

During exploration projects that undertaken since the early 90's, the artist has produced numerous documents: photographs, collections of notes, various data, as well as many graphic works.

The Gallery In Situ has chosen to honor these works that led to the long-term projects that the artist has developed since the beginning of his artistic career.
Characterized primarily by a blue and red color coding, a composition and a very clear layout, Mark Dion 's drawings are reminiscent of the artist's taste for the naturalist displays and archaeological surveys.
Through this conscientious, falsely laborious and naive fashion, we peer into the precision with which the artist builds and develops his projects, and how he is constantly ruminating on the rapport culture enjoys with nature.

Born in Massachusetts in 1961, Dion currently lives in New York City. He received a BFA and an honorary doctorate from the University of Hartford School of Art, Connecticut in 1986 and 2003, respectively. He also studied at the School of Visual Arts in New York from 1982-84, and participated in the Whitney Museum of American Art’s Independent Study Program from 1984-85. He has received numerous awards, including the ninth annual Larry Aldrich Foundation Award (2001) and the Smithsonian American Art Museum's Lucida Art Award (2008).

Throughout the past two decades, his work has been the subject of major exhibitions worldwide. Notable solo exhibitions include The Macabre Treasury at Museum Het Domein in Sittard, The Netherlands, (2013), Oceanomania: Souvenirs of Mysterious Seas at Musée Océanographique de Monaco and Nouveau Musée National de Monaco / Villa Paloma in Monaco (2011), The Marvelous Museum: A Mark Dion Project at Oakland Museum of California (2010-11), Systema Metropolis at Natural History Museum, London (2007), The South Florida Wildlife Rescue Unit at Miami Art Museum (2006), Rescue Archaeology, a project for the Museum of Modern Art (2004), and his renowned Tate Thames Dig at the Tate Gallery in London (1999).

In 2012, his work was included in dOCUMENTA 13, curated by Carolyn Christov-Bakargiev in Kassel, Germany, and has also been exhibited at MoMA PS1 in New York, Guggenheim Bilbao in Spain, Minneapolis Institute of Art in Minnesota, Arp Museum Bahnhof Rolandseck in Remagen, Germany, and Kunsthaus Graz in Austria.
He is currently preparing an important solo show in HfBK Dresden (Germany) for november 2014, and at the Laboratoire (Paris) in collaboration with Cambridge University.
www.insituparis.fr