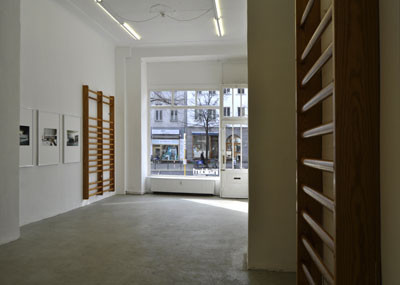 When visiting Detroit last year, I encountered an abandoned school that caught my particular interest. I was travelling with the economic historian, photographer and researcher Jan Jörnmark, visiting abandoned sites in order to document effects of the ongoing globalization for an upcoming book.

In this school building, which was clearly constructed in the sixties, I met a peculiar sadness. Smashed up and beaten, the architecture still radiated some joy of being built in the first place. The vanity of the floors and walls interacted strongly with the lack of spirit in the air and the overall decay.

It was not an evil spell that emptied the building, nor had a hurricane passed through breaking the windows. A chain of decisions made by human beings had turned this building into an abandoned and vandalized former school.

Working with Jan Jörnmark has among other things made me aware of a concept called Creative Destruction - a term originally derived from Marxist economic theory and later popularized by the American economist Joseph Schumpeter, as a theory of economic innovation and progress. It is obvious that something must die in order to regain life. Nature tells us so, some religions do too. The poetry by a catchy phrase like that, summing up gigantic movements and undercurrents of enormous complexity, is very soothing on a day like this. You already know what I am getting at here; contemplate for a second the fate of just one child at the post mortem school in Detroit.

Drawing from a device by the American philosopher John Dewey; "Learn to do by knowing and to know by doing" (Applied Psychology 1889), I used the more popular pedagogic term "Learning by Doing" to contextualize the images in the exhibition. Learning by Doing is the way to go. The young person who wrote "Suck Good Pussy Every Night" on the blackboard in one of the classrooms knows this. The politicians, who decided to empty the school of teachers and students and leave it to the birds and drug addicts, know this as well.