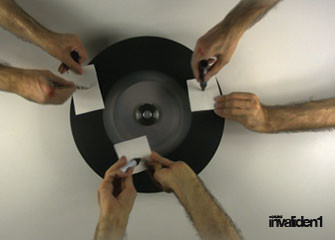 This is the second time that Invaliden1 is presenting an exhibition focused on drawing.
Although having different approaches to this discipline the three Berlin based artists, Alexandra Aguiar, April Gertler and Carlos Figueiredo all have elected it as their preferential medium.

Alexandra Aguiar is presenting six drawings organized in two autonomous triptychs placed next to each other. Done in such materials as oil pastel, charcoal, graphite, gouache, etc. her works are populated by hybrid organic characters. Often with a bulbous appearance and emanating almost human characteristics, these figures merge with abstract gestural marks to generate ambiguous narratives. They seem to have been caught in some restless activity, where gestures of rotation, hammering, penetration and collision, to name a few, may suggest we are witnessing scenes of erotic or belligerent nature, mixed with more enigmatic undertakings. The artist relies on a wide range of drawing procedures to orchestrate all this animation. From energetic staccato assaults to a fine and patient rendering of details, erasing and scratching, she creates heterogeneous drawings that oscillate between an apparently neglected roughness and a smooth, nuanced sensuousness.

April Gertler's wall drawing plays off of the children's game Hide and Seek where one or more players search for the other players. The game starts with all players in a central location. One player is given the designation of "it". There are two parts to the game: the hiding - all the players, except "it", locate a place in which to hide, and the seeking - "it" attempts to find at least one of the players. The overall objective is not to be discovered by "it".
Here, the game has already started and the female character is in the process of counting as the other player(s) hide. The ephemeral nature of the drawing - which uses marking chalk as the main medium - connects to the delicate balance between the moments that we want to hold onto mixed with what we actually remember. The chalk can be rubbed, or even blown away in a matter of moments and then we are left with what was there and the memory of what we experienced.

Carlos Figueiredo exhibits drawings from two ongoing series and a recently finished video. In one of those series, a gestural mark is the starting point of an activity more characterized by a hard-edge clarity than by any expressive intentions. Outlining the lines carelessly traced on a blob of fresh paint and filling the spaces between them with parallel and crosshatching, the artist arrives at a first drawing. He then reshapes it through various strategies and the resulting constructions freely migrate from one work to another, metamorphosing and associating in different ways, never reaching definitive formulations. Indeed, a sense of inconclusiveness frequently pervades this drawings, in spite of a totally precise look, as if they were just a provisional solution or a step in an investigation without any clearly stated goal. In the other group of works, after having laid out a mass of intersecting drawings, the artist uses this all inclusive cloud as a foundational ground where imagery can emerge. The final result is a kind of anarchic pandemonium in a tiny format, a densely packed scene usually dominated by a central ambivalent figure. The multiplicity that characterizes this drawings is also shared by the exhibited video, titled Days are loaded. An omnipresent disc is shown in the center of the image, menacing and hypnotic, and seems to paradoxically attract objects with the centrifuge force generated by its rotation. A dynamic choreography playfully unfolds in its orbit, silently charged with the most diverse references. Among them we can find allusions to artistic practices, particularly to drawing, the focus of this exhibition.