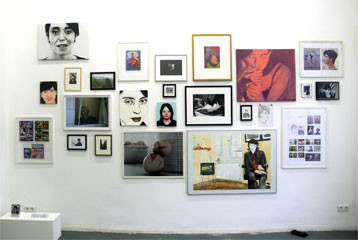 The exhibition project Excuse me, are you famous? takes its starting point from the consciousness that the art system - like each social structure - is characterized by hierarchies which determine in particular the relationship of curator and artist. Since the late 1990s, it became obvious that the curator is no longer someone who simply organises exhibitions and museum displays but is also able to manipulate taste, influence the career of artists and sometimes becomes a bigger star then the artist that he/she is exhibiting. The "super-curator" is born.

With an ironic undertone, Excuse me, are you famous? refers to this phenomenon and consists exclusively of portraits of the curator. All works were realised between 1990 and 2005.

By showing all portraits, Excuse me, are you famous? ironizes the phenomenon of the "self-promotion" of the curator with the help of an exhibition as an effective PR- and media strategy, in which the artist and the art work have a quasi illustrative function regarding the importance of the curator. Because all works are portraits, they function like mirror images. Besides, the exhibition enables an insight into the private sphere of the curator – an insight far beyond the usual constellations. While the publication of the private moment in artistic works and – accordingly – an autobiographical or psychoanalytical reading are widespread phenomena in contemporary art, the persona of the curator remains a dark horse. The curator usually speaks with the voice of the other – the artist. Although the portraits with their representative function are interpretations of the persona, they allow in many cases an insight into the relational network of the curator and various personal details.

Additionally, Excuse me, are you famous? is a site-specific project, because it was developed for an artist-run space – in this case Invaliden1. This is a fundamental precondition for the idea of the project, because hierarchies of the artsystem were inverted, since the curator was selected by the artists (and not vice versa, asi it is the usual way in exhibition projects). The participation of two members of Invaliden1, Sergio Belinchón and Santiago Ydáñez, adds another aspect to the powerplay between curator and artist.

Excuse me, are you famous? was developed for WL project | Berlin Hong Kong. Kathrin Becker is part of WL project | Berlin Hong Kong. It is a forum initiated by Shahram Entekhabi and active since the fall of 2008 aiming to catalyse the development of international curators, critics, artists, and audiences with a focus on the European and Asian regions.

On February 20, 2009 at 7 pm, and under the title "Structuring: Artist – Curator – Institution – Audience" there will be a talk between Rui Calçada Bastos (Invaliden1), Kathrin Becker (curator), Shahram Entekhabi (WL project | Berlin Hong Kong) and Alvaro Rodriguez Fominaya (Para/site, Hong Kong) (via Internet) that highlights the structures of the art system with a main focus on artists ́ initiatives and artist-run spaces.
www.invaliden1.com