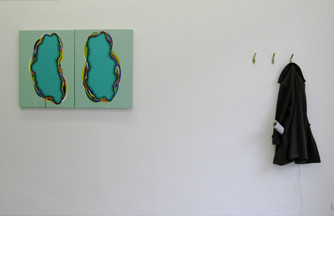 Without renouncing the singularity of their visual language, every invaliden1 artist engages in a common issue: the ruse of the representation. This ruse should not be understood as a tool to disguise a certain truth, but rather as a medium to find out further more.

The showed paintings and videos manage different visual tensions and offer some wit plays. The visitors are thus leaded to the consideration, if what are they looking at, is the only thing you can see. In doing so, this show would like to suggest that in a large number of occassions, what in reality is there, is a illusionistic play between the pictured object and its interpretation.

The video work of Sergio Belinchón operates within the idea of an urban context slowly revealed. But it is a different issue that is nevertheless detected: a critic to the act of seeing.

This Rui Calçada Bastos piece is a metaphor for the disenchantment in relationships. Set the sound of an old lyric by Marlene Dietrich, the artist walk on a rotating platform. His position does not change, however, this constant activity becomes disenchantment.
(Text from: www.ruicalcadabastos.com)

In collaboration with Santiago Ydáñez, Paul Ekaitz playfully conjures up a still image: liberating the confined power of its sound and its movement.

In one of the most recent diptychs (Untitled, 2009, acrylic on canvas) Antonio Mesones keeps on developing his latest Berlin series. Using the power of the colors and the composition he creates formal tensions, which are used as decoy for the sensibility of the viewers.

Noé Sendas in the piece The Coat attentively reworks a film sequence, and creates an ongoing juggling game between the film solo character and the object that contains it, the Coat.

Santiago Ydáñez's paintings (Untitled, 2009, acrylic on canvas) show not only his contained and full-of-life brushstrokes, but also reach to disturb the viewer with the presence of animal figures, calling upon the presence of further perceptions.
www.invaliden1.com