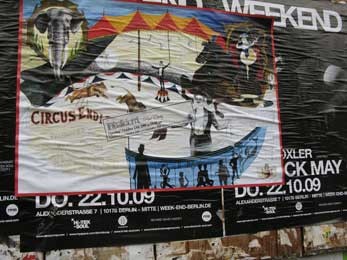 "... everybody look from outside, the viewer once again awaiting (waiting for) a sensation.
an action frozen in time mirroring a skill only a few can manage.
impossibility turned into reality, the equilibrium impossible to attain in real, daily life.
A un-ending plateau of possibilities which, in the world only a few survive.
the equilibrium on the "rope/road/way" on the verge of breaking.
timeline which one has to cross knowing it might break and fall endless at anytime.
a space (plateau) where action itself becomes the metaphor of reality"

Images such as the exhibition poster („Circus Endless,“ in collaboration with Richard Capstick, 2008) hang all over Berlin, seducing viewers with promises of extraordinary shows and stellar performances. The public expects to see how something impossible can be achieved, to become part of the magic and the wonder, as well as to see an acrobat, like the one in the photograph, „On Limit“(2008), struggling to keep her balance on a tightrope that is about to break.

Paul Ekaitz ́ work reflects on these expectations, on the moment in which one faces them, and on the symbolism they contain. In this exhibition, the artist considers all these questions, but also something else: that which we do not usually see. Paul Ekaitz reveals the traps and the cardboard behind his photographs when he shows us his work at the studio. He makes us participate in the staging and production as soon as we enter the gallery, forcing us to remain at a distance if we observe it from outside. Elaborating on this idea, the artist develops another installation, „A Real Image“ (2009), this time in the front window of the gallery. In this installation, the artist redefines the limits between space and image, fiction and reality.

In this way, this last work of Paul Ekaitz deals with many metaphors, and with what one expects from something and what it truly is, with being on the tightrope, with facing games of balance, with impossibilities and, at least, with making it possible by doing as much as imaginable in life’s circus.