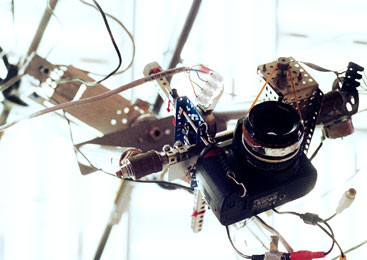 Curated by Paz A. Guevara

For the first time the video artist Reynold Reynolds has moved his entire studio into the art space, producing his new film-works live to the audience. During the exhibition the activity of setting up and shooting become six film-performances within an evolving set installation. The live construction of the image destroys the illusion of film, revealing the whole studio process as art.

Bruce Nauman had the simple but profound realization: “If I was an artist and I was in the studio, then whatever I was doing in the studio must be art. At this point art became more of an activity and less of a product.” In this project, film is not only perceived as a projection of what was recorded, but as an on going action. Set up, shooting, editing and projection are taken out of the studio to occur in the art space. The spectator will no longer observe a projected surface, but will be immersed in cinema pieces that combine actions, objects and film.

Using a motion control system, a photo camera, and frame-by-frame technique, the images shine instantaneously to the public. Reworked through the technique of montage, the stills become a flow of 25 frames per second. Between photography and assembled oscillation of lights, Reynolds’ film is constructed and destroyed by its minimal parts.

Immersed in the installation, the viewer gives attention to the set and reality beyond the frame. Tracks, spotlights, fake walls, scientific artifacts, mathematical tools, rare music instruments and everyday objects depict a contemporary Wunderkammer. The ‘cineficated’ gallery makes public the difference between performance and documentation; self and representation; camera and eye; objective and subjective view.

Film introduced new determinations of space and time as forms of sensibility in relation to thinking. Reynolds’ film-performance contributes the further dimension of aliveness to the understanding of how moving image art overlaps with other arts and practices including performance, photography and installation. Inverting the normal exchange, this time the artist will be the one that takes the resulting film pieces from the gallery, rather than the customary removal of art works from the artist’s studio.

* Six Easy Pieces refers to the title of Richard Feynman’s book where he presents six fundamental truths of reality.
www.invaliden1.com