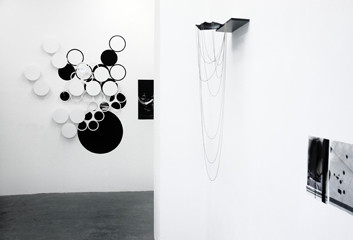 Emanuel Geisser shows a complex reference system in which real and virtual space are overlapped. Through the marks on the floor he assigns the viewer a position in the room, where his gaze falls into a mirror that reflects a detail from the full-room installation. This turns the viewer’s gaze into a part of view axis and reference system. The viewer completes the circle, the loop of a story, in which begin and end are unclear.

Stef Heidhues ́ works reciprocally reflect each other by playing with dimensions and perspectives, nature and artificiality, accident, disintegration and construction.

Emanuel Geisser is interested in holes in the mountains, in the relationship between human beings and nature and in the question about everyone’s motivation. He makes landscapes of polystyrene that reveal the fragility of world constructs with their imperfection, and leave a taste full of longing. He builds landscapes in the computer, which evidence in endless loop the absurdity of the big questions of life and leave the answers unresolved. Therefore his installations and films present states of a nonsystematic researching, in which is not clear, if the results of this scientific research represent the reality or if they ultimately bring the nature out of balance. In his room installations we constantly find traces that obstinate scientists had left. We can also see in the films, how these scientists, mostly in uniforms and with inexplicable equipment, investigate lands and landscapes – investigate the world in fact. Devices to explore the sky, drawings on the floor and walls, telescope, stratosphere balloons, floodlights and unconventional measure systems create more questions than they answer and unveil details of a disconcerting story, in which not at last the irrationality plays a main role. An incomprehensible mysteriousness defines Emanuel Geisser ́s works which ultimately lead us to the repeatedly same questions. He traces a world where not every law has been investigated, in which not every detail is clear. In his nature it is violently bubbling and the possibility of a powerful nature event that will agitate our environment is not to be excluded.

In Stef Heidhues’ works the construction dominates. There is no outside for her. Even nature, which appears in the collages and is haunted in the installations, is a construction. The romantic perspective of an original idyll is disabled. Heidhues ́ idyll is composed by an entropic development. Human beings have not been replaced, but decoration is omitted. Nature and architecture are in a constant intersection. None of them seem to antecede the other. Nevertheless subjects are found between both, surrounded by apparently futile forms of Modernism. Heidhues assumes the responsibility of the (re) construction. However, her promise is not utopic anymore, but the view on an entropic process. She deals with the “second nature of human construction” like if it were the first: it is not the starting point of reconstruction of its origin, but the construction of its possible pathways. She works with inorganic, artificial materials: from plaster sculptures, whose apparently functional bodies always slip towards disfunctionality, to the veneer elements from her architectural constructions, which lose their scale, because their bodies are only determined by the view axis. The spreading out of the work in collages, sculptures and installations leads to concatenations, which give Heidhues ́ work the appearance of a closed-in-itself nature, a world after nature. The entropy that is inherent in her works, lies in the construction principles she adds to the historic forms, sceneries from the city and formal conceptions. They do not show an exit, but conserve the situation they create.