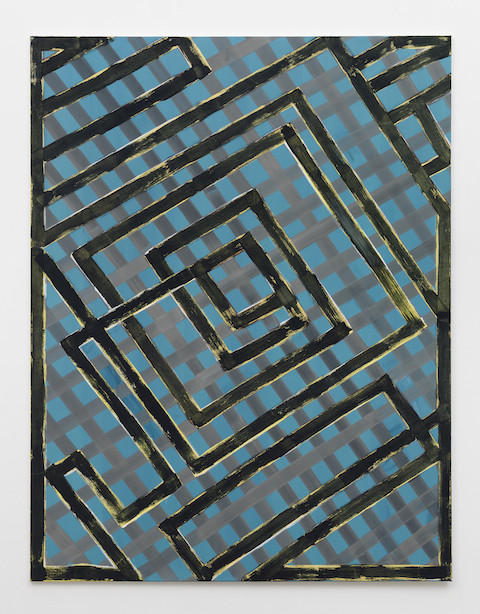 Half a century after Frank Stella's thesis “what you see is what you see“ we still can't believe it. Right. So we see what we see. And that's about it. No hidden meanings. And yet: somewhere behind the appearance reality must be.
In this show however everything really is painted – including reality. And all is there to be seen – provided you're able to do so.
For that's the very problem; and Emanuel Seitz is attending precisely to that. Instead of luring us away from the canvas straight into our mental cinema he presents us with the way we see – how we scan or associate rather, or get interactive otherwise, as opposed to seeing what there is. Which would be more than enough.
A common theme of Seitz' recent work is the picture plane's division into two levels. On the face of it, the foreground and its back are clearly distinct. Upon closer inspection the supposed rear unfolds the history of its formation. Due to an awareness heightened by mute colours and forms, earlier stages become apparent like some sort of sediments.
The upper and hence manifest stratum resembles the final word after a series of revisions, an ultimate decision burying former pros and cons in a telling silence – at least until the eye becomes aware of the shoals gaping beneath the seemingly homogeneous surface.
Thus having become traceable, the chain of considered and discarded deliberations culminates in a final state that preserves its genesis visibly.
Stripes move outward from various centres, or else divide the plane into even but not uniform compartments. Sober figures perform measured movements within horizontal, vertical and occasionally diagonal coordinates, thereby substituting mathematical correctness by a sensuous, sometimes almost tactile conception of the not quite geometric pattern.
The gaze is taken along paths whose differentiation in terms of colour suggests locomotion. Whether they ascend or descend, whether they turn in- or outward is in the eye of the beholder. Roaming the grid with our eyes we learn a lot about our condition.
Whether we discern a space cluttered or enlivened, whether scaffolds falter, rest or even stabilise the plane, whether they run accordingly or disaccordingly, subject or support each other - all these evaluations are based on our past and present, our biography and attitude towards life. What you see is what you are.
A painting's form of communication is beyond the linear logic of language. Contemporary art's much-cited openness offers an abundance of readings without predetermining a particular one. Emanuel Seitz' painting with their calm vibration of stationary waves lend this ambiguity its visual form.
What we see is what we've learned to see. These images are a favourable opportunity to do so.
www.jackystrenz.com