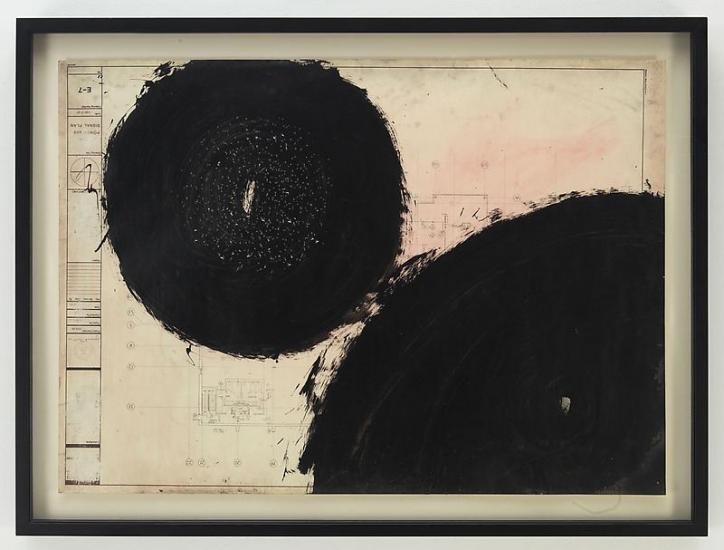 James Cohan Gallery is pleased to present Italian-American artist Aldo Tambellini, We Are the Primitives of a New Era, Paintings and Projections 1961-1989, curated by Joseph Ketner and running from September 12th through October 19th. This is the artist's first New York gallery exhibition in nearly four decades.

Iconoclastic and experimental artist Aldo Tambellini was among the first artists in the early 1960s to explore new technologies as an art medium. Tambellini combined slide projections, film, performance, and music into sensorial experiences that he aptly called “Electromedia.” Such work informed Andy Warhol’s Exploding Plastic Inevitable and Woody and Steina Vasulka’s The Kitchen. With the rediscovery of this material, Tambellini’s work has become the subject of great interest for early new media.

Tambellini’s artistic practice is based on black and its polar opposite, white. The artist believes that the circle is a metaphysical manifestation of energy, stating “Black is the beginning. It is birth, the oneness of all, the expansion of consciousness in all directions” and “light is energy...the same energy we have discovered in the atom.”

For this exhibition, Tambellini will create a multimedia piece incorporating his seminal cameraless films, “Lumagrams” (projected hand-painted glass slide), selections from the Black Film Series and sound in an immersive environment that is meant to “dislocate the senses of the viewer.” Additionally on view will be Tambellini’s paintings and unique photographs, or “Videograms,” most of which have not been seen since the 1960s and have only recently been rediscovered.

The Black Film Series, a sequence of seven films made between 1965-69, is a primitive, sensory exploration of the medium, which ranges from total abstraction to the assassination of Bobby Kennedy, the Vietnam War, and black teenagers in Coney Island. Before picking up a camera, Tambellini physically worked on the film strip, treating the emulsion with chemicals, paint, ink and stencils, slicing and scraping the celluloid, and dynamically intercutting material from industrial films, newsreels and broadcast television. Abrasive, provocative and turbulent, the series is a rapid-fire response to the beginning of the information age and a world in flux. In 2012, Tambellini was awarded the Avant-Garde Masters Grant from The National Film Preservation Foundation and The Film Foundation, the latter created by Martin Scorsese. The grant allowed for the Harvard Film Archive to restore and preserve the entire Black Films Series.

exhibitions in 2013, Tambellini will introduce his Black Film Series at The Museum of Modern Art on October 18 as part of To Save and Project: The 11th MoMA International Festival of Film Preservation. Additionally, Tambellini will be the featured artist at the 2013 Montreal International Film Festival with performances and screenings at the Musée des beaux-arts de Montréal. Tambellini’s work has recently been exhibited at the Tate Modern, London (2012); and the Centre Pompidou, Paris (2012); and is included in the collections of the Harvard Film Archives, Cambridge, MA; the Rose Art Museum, Waltham, MA and the New Britain Museum of American Art, New Britain, CT, in addition to several major private collections. The artist has been a significant contributor to important group exhibitions such as Black Zero, Brooklyn Academy of Music, Brooklyn, NY (1968); Cineprobe, Museum of Modern Art, New York (1971); Documenta 6, Kassel Germany (1977) and Sao Paolo Biennale (1983). Over the exhibitions several decades, Tambellini has been the recipient of several awards, including the Grand Prix at Oberhausen Film Festival, 1969 and First Place in the “Short Experimental Film by an Independent Filmmaker” category at the New England Film & Video Festival in 2005 and at the Syracuse Film Festival in 2006. His career also integrated a fellowship at the Center for Advanced Visual Studies at MIT 1974-1986. Aldo Tambellini was born in Syracuse, New York, in 1939, spent his childhood in Lucca, Italy, and exhibitionsly lives and works in Boston, Massachusetts.
www.jamescohan.com