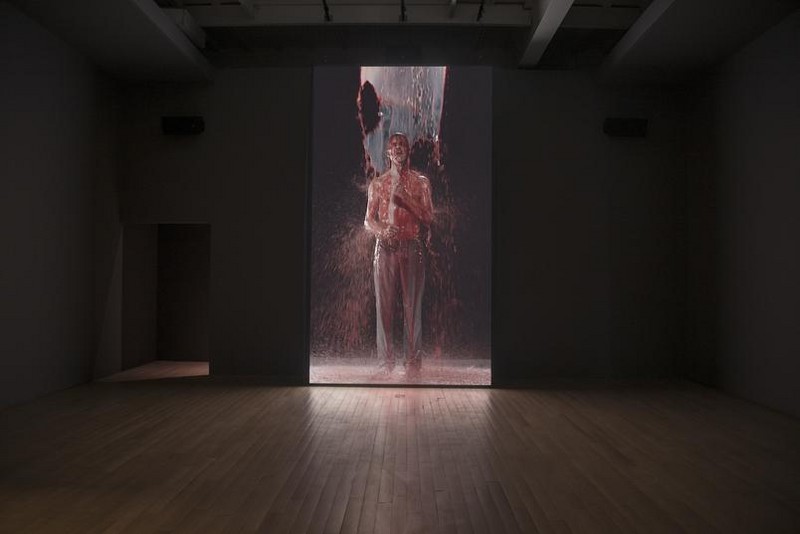 Regarded as a seminal figure in the development of video art, Viola has been celebrated throughout his 40-year career for combining state-of-the-art technology with universal humanistic themes – birth, death, and the unfolding of consciousness. These themes continue in Viola’s Inverted Birth, which explores the life cycle as a continuum rather than a linear progression. Viola has remarked, “Birth is not a beginning, death is not an end.

In the main gallery, Viola’s monumental video and audio installation Inverted Birth is projected onto a fifteen-foot high screen anchored to the floor. The work depicts five stages of awakening through a series of violent transformations. The piece begins with a man standing in darkness, coated in black fluid. Gradually, the fluid begins to flow in reverse and rises upward with increasing velocity. The fluids change from black to red to white, ultimately becoming clear like water. A soft mist covers the man for the final stage of awakening. The essential elements of human life: earth, blood, milk, water and air, and the passage from birth to death, here are inverted when darkness is transformed into light.

In Ancestors, on view in Gallery 1, a mother and son make a journey on foot across the desert in the heat of summer. In the course of traversing this inhospitable landscape, a new consciousness unfolds when they become swallowed by a dust storm and emerge finding solace in one another.

In Gallery 3, the four pieces from the Martyrs series Earth Martyr, Air Martyr, Fire Martyr, and Water Martyr are installed. The works are derived from Viola’s large-scale installation Martyrs (Earth, Air, Fire, Water) (2014) unveiled last year at St Paul’s Cathedral, London and on long-term loan from Tate. It is the first moving-image artwork on permanent view in a cathedral in Great Britain.

Each work is shown on a vertical LCD screen, and installed one on each of the four walls, creating an immersive environment in the gallery’s last room. Four figures are silently and gradually overcome by the four elements of nature. As Viola describes: “Flames rain down, winds begin to lash, water cascades, and earth flies up. As the elements rage, each martyr’s resolve remains unchanged. In their most violent assault, the elements represent the darkest hour of the martyr’s passage through death into the light.”

In late November 2015, Thames and Hudson released Bill Viola, the first monograph to comprehensively chart the artist’s career, with text by John H. Hanhardt, consulting senior curator of film and media arts at the Smithsonian American Art Museum, Washington, D.C., and edited by Kira Perov, executive director of Bill Viola Studio and Viola’s partner and collaborator for 35 years. The publication will be available in the gallery throughout the exhibition.

Since the early 1970s, Viola has been creating video art works that have been exhibited worldwide and are included in private and international museum collections. His major solo exhibitions include: Bill Viola: Installations and Videotapes, Museum of Modern Art, New York (1987); Buried Secrets, at the U.S. Pavilion, 46th Venice Biennale (1995); Bill Viola: A 25-Year Survey, Whitney Museum of American Art, New York (1997); Bill Viola: The Passions, J. Paul Getty Museum, Los Angeles (2003); Bill Viola: Hatsu-Yume (First Dream), Mori Art Museum, Tokyo (2006); and Bill Viola, visioni interiori, Palazzo delle Esposizioni, Rome (2008). His 2014 exhibition at the Grand Palais, Paris, brought in 300,000 visitors in the artist’s largest survey show to date. Concurrent with the gallery show, Viola is featured in a solo exhibition at Yorkshire Sculpture Park, United Kingdom (through April 2016). Forthcoming in 2016, Viola’s Inverted Birth will be exhibited at the Walt Disney Concert Hall as part of the Los Angeles Philharmonic’s Mozart & Pärt: The Angels festival. He will be the subject of a solo exhibition at the National Portrait Gallery in Washington D.C., opening November 2016.
www.jamescohan.com