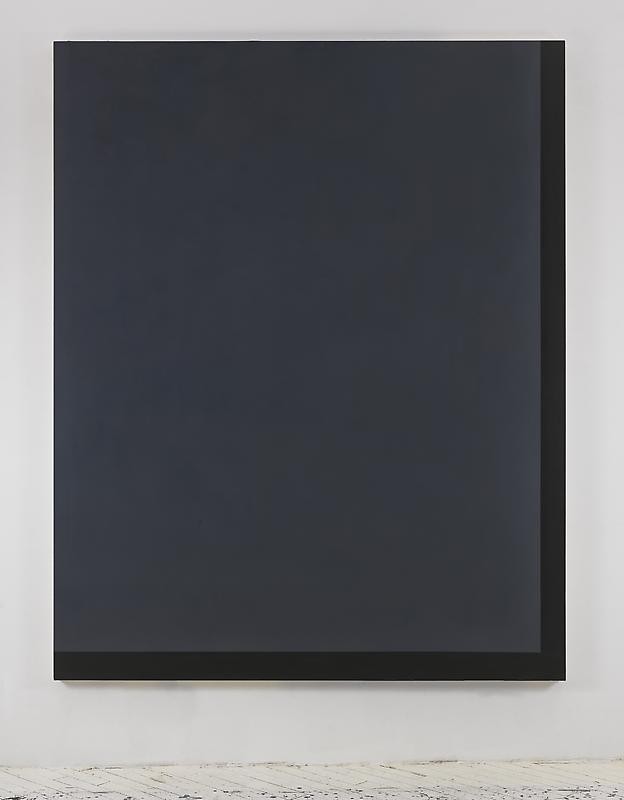 James Cohan Gallery is pleased to announce the solo exhibition of Brooklyn-based artist Byron Kim’s recent work—a series of large-scale paintings inspired by the sky at night in the city. The exhibition opens on Friday, November 4th and runs through Saturday, December 17th. Byron Kim: Dark, a 56-page hard-cover catalog including 15 color plates of the new work along with essays by David Hinton and Mark Dow will be published on the occasion of the exhibition. This is the gallery’s first exhibition with the artist whose career spans over two decades and includes important solo and group exhibitions worldwide.

Like the artists whom he admires; Ad Reinhardt, Mark Rothko and Agnes Martin, Byron Kim works in an area one might call the abstract sublime; his work sits at the threshold between abstraction and representation, between conceptualism and pure painting. In his richly hued, minimalist works, Kim seeks to push the edges of what we understand as abstract painting by using the medium to develop an idea that typically gets worked out over the course of an ongoing series. His paintings often appear to be pure abstractions, but upon investigation and contemplation, they reveal a charged space that connects to the artist’s personal experiences and whose underlying ideas raise questions about issues from politics to environmentalism to cultural identity. Interviewed in his sunny Brooklyn studio, Kim quips, “I’m a painter until 2:00 in the afternoon when the daylight in my studio is so blinding that I become a conceptual artist.”

In this new series of work, Kim paints night in the city, evoking the quality of light and hazy cloud formations in the transition from dusk to dark and beyond. He depicts the state of constant suspension that city dwellers experience; the omnipresent lights block their view into the cosmos and deny a resolution to the day that true darkness delivers. The paintings in this ongoing series, measuring 90 x 72 inches, often have hard-edged, painted borders on two or three sides that act as reminders of the architectural elements like windows, cornices and facades of buildings that frame our views of the city sky. Kim paints his crepuscular skies from memory, creating open spaces that act as trigger points for the viewer’s inner dialogue, giving the imagination room to resonate and remember.

Byron Kim, born in 1961, is a Senior Critic at Yale University. Works from his Sunday Paintings series are currently on view at the Brooklyn Museum in the exhibition “Unfolding Tales: Selections from the Contemporary Collection.” Upcoming in 2012, his work will be included “Time-Lapse” at SITE Santa Fe an exhibition curated by Irene Hoffman. Kim’s signature work Synecdoche started in 1991 and exhibited in the Whitney Biennial in 1993, is in the permanent collection of the National Gallery in Washington, DC. This ongoing series consists of a grid of hundreds of small panels that each match to color of a person’s skin. It is both a portrait of people in the artist’s life and an exploration of race and community. Kim’s mid-career survey, “Threshold” traveled widely from the Berkeley Art Museum, CA to the Samsung Museum of Modern Art in Seoul and on to five other locations in the United States (2006/7). Kim was included in the landmark exhibition “Color Chart: Reinventing Color, 1950 to Today,” at the Museum of Modern Art, NY and Tate Liverpool, UK (2008/9). Kim participated in many other international exhibitions including the 7th and 3rd Gwangju Biennale, Korea in 2000 and 2008. In addition to the National Gallery of Art’s collection, Kim’s work is included in the collections of the Albright-Knox Art Gallery, Buffalo, NY; Art Institute of Chicago, IL; Brooklyn Museum, NY; Hirshhorn Museum, Washington D.C.; Norton Family Collection, CA; Wadsworth Atheneum, CT; Walker Art Center, MN; and Whitney Museum, NY among others.
www.jamescohan.com