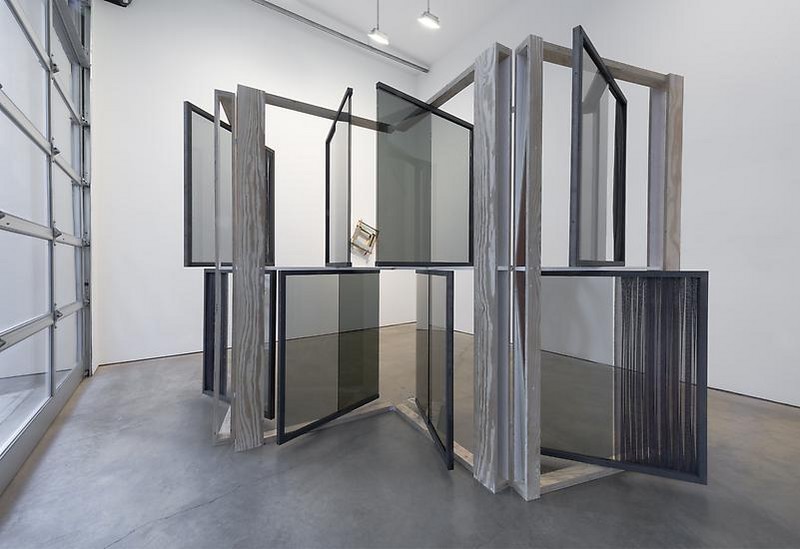 For this exhibition, Rowe presents a new large-scale installation Suffusion Screen (her thoughts, means, and ends), 2014 that bisects the gallery in a series of accordion-shaped screens. The work investigates how the built environment can affect the body’s relationship to space, frustrating viewpoints and blocking movement. Using a mix of new and found components, the formal elements of the sculpture suggest a fluctuating anxiety. For example in this installation, the orange and red hues of the interior wallpapered sections of plywood recall Alfred Hitchcock's film Marnie, where the director used a red overlay on the screen to signify a triggered memory of a repressed traumatic event. This plays into how architecture and its decorative components can be emotional in themselves as well as catalysts for eliciting buried memories that are either forgotten, painful, pleasant or nostalgic.

William Monk is an artist with an acute interest in the way painting is experienced and, accordingly, the ways in which he as a painter can guide those experiences. Monk’s paintings pulsate with ecstatically worked surfaces, an atmospheric palette, and leaps in scale between micro and macro. In each work there is a universe of information to discover. Engaged equally with image and paint, Monk’s paintings remain true to both. As the artist says, “digital images are becoming the de facto way we perceive and process the world, with surface and superficial virtuosity defining momentary meaning. This creates a problem. How to ensure that painting is experienced as a very different form of engagement, and framing as more than the inferred edges of an iMac screen? Although I have taken from the digital world, it is to confront this imagery with physical, organic paintings. Both image and materiality are explored to a point where the final object becomes painting that expresses its origin as much as its conclusion.”

Paravent (Universum) (2014) is not so much a depiction of a forest as a painted equivalent: cropped just short of the forest floor and hung low on the wall, the painting’s dense composition holds the viewer in a place between the physical and mental, primed to revel in the patterns of our inner and outer world. “Rather than have a human presence in the work in a traditional narrative sense,” Monk explains, “I want the viewer to be aware of their own presence in front of the object. I feel to include the human form would act as a barrier to that.“

William Monk (b. 1977, United Kingdom) won the 2005 Royal Award for Painting during his two years in Amsterdam studying at the residency De Ateliers, resulting in widespread, ongoing institutional recognition in Northern Europe. Recent museum group exhibitions include the Museum Belvédère, Heerenveen, the Gemeentemuseum, The Hague, and a solo exhibition at the Fries Museum, Leeuwarden. In 2009 he was a recipient of the Jerwood Painting Prize in the United Kingdom, which resulted in a yearlong national touring exhibition. Monk lives and works in London.

Richard T. Walker records his encounters with the American landscape in video, installation, text, photography and music, raising questions about the journey toward consciousness and our relationship to the natural world. Walker’s diaristic work nods naturally to 19th-Century Romanticism and the intensity of landscape conjured by Caspar David Friedrich or Frederic Church, while the American landscape’s representation on film—the way that nature can become a protagonist in a narrative—is an equally strong inspiration.

In the two-channel video installation outside of all things (2013), a film begins with the crescendo of a repetitive dissonant chord as the artist as moves through the desert with a large cutout image of a mountain peak strapped to his back. Reviewing the work in Frieze, Colin Perry writes: “As the sun starts to set, the soundtrack changes to a programmed drumbeat and, as a coda, he plays a thumping tune to the landscape on a keyboard and a battery–powered amplifier. This set-up is rigged to a couple of neon strips in the shape of the outlines of two mountaintops, which blink in time to the music: a disco for the wilderness. The scene seems inexplicable, redolent of some form of communion beyond verbal or textual cognition.”