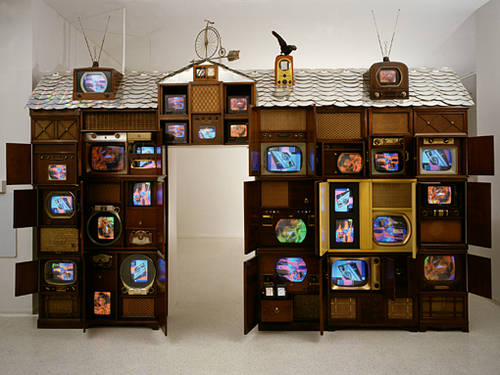 Widely exhibited throughout his career, Paik worked closely with artists John Cage, Joseph Beuys, Charlotte Moorman and others involved in the Fluxus movement, focusing on immediate, temporal and chance encounters between ideas, the object and the public. His innovative combinations of music, video, sculpture, performance, television broadcast and technological experimentation offer subversive and often-humorous critiques of a culture consumed by technology. The artist died at age 73 in January 2006.

Installed in the front gallery, W3, 1994, is reflective of Paik’s expression “electronic superhighway,” a term that foreshadowed how technology would come to connect diverse cultures at high speeds. The work incorporates 64 color TVs installed in zigzagging patterns on the ceilings and floors of a dark room. Previously exhibited in the travelling
exhibition The Electronic Super Highway: Travels with Nam June Paik, each television screen captures an image for a split second before it jumps to the next – a tour de force of images chasing images.

In the main gallery space are In-Flux House, 1993, and Tower, 2001. The former is an architectural structure of old TV cabinets and monitors in the form of an ordinary house. The implications point to the pervasive nature of the medium that invades, to ever greater
extent, both public and private spaces--from Times Square to the suburban home. Tower, 2001, is a 15-foot structure that incorporates neon lighting with old TV cabinets and monitors displaying video footage of communication towers such as the World Trade Center. The work seems to suggest Paik’s interest in the phenomenon of electronic
communication and his prescient, pre-internet notion of “the global village.”

Two robot figures; Karen Blixen Robot, 1996, a tribute to the author of Out of Africa, and From Neander Valley to Silicon Valley, 1994, will also be on view. The former is an arrangement of old TV monitors adorned in stereotypical ornaments from Blixen’s adopted
Africa, including batik fabric, a straw hat and tribal masks, and was commissioned as part of a series of six robots based on important Danish figures for the Electronic Undercurrents exhibition at the Statens Museum for Kunst in Copenhagen, Denmark. From Neander Valley to Silicon Valley combines old TV monitors with animal fur and
prehistoric tools – a work that can be understood as a humorous representation of a theme central to Paik’s work; man’s ability to shape and transform technology over time, from pictographs to the present internet age.