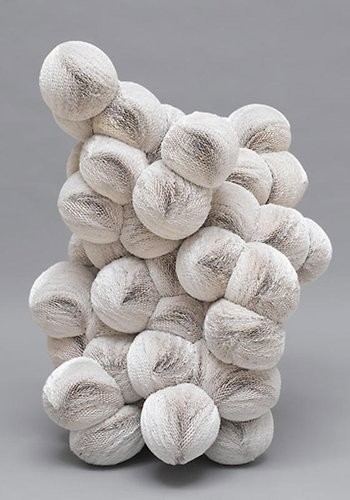 James Cohan Gallery is pleased to announce the opening of a new group exhibition, Shaping Space, on January 16. This selection of works examines how artists literally and conceptually shape the object and its environment. With nineteen-sixties Minimalism having established an active engagement between the spectator and object, the works in the exhibition continue this dialogue by including the viewers' physical participation or perceptual awareness as a crucial component in each artwork.
Artists' approaches vary; from the subtle as found in Alan Saret's ethereal wire clusters or Fred Sandback's floor-to-ceiling extension of acrylic yarn, which delineates the gallery's corner as the sculptural object; to the large-scale, as in Spencer Finch's installation in the front gallery that re-creates the quality of light of a candle-lit interior and Ricci Albenda's video portal into an imagined architectural space. The works in the exhibition are executed in a variety of materials that include stone, stainless steel, wire, natural light, and video.
The artists included in Shaping Space include Ricci Albenda, Tara Donovan, Spencer Finch, Richard Long, Fred Sandback, Alan Saret, Hiroshi Sugimoto, Tom Friedman, and Roxy Paine.
www.jamescohan.com