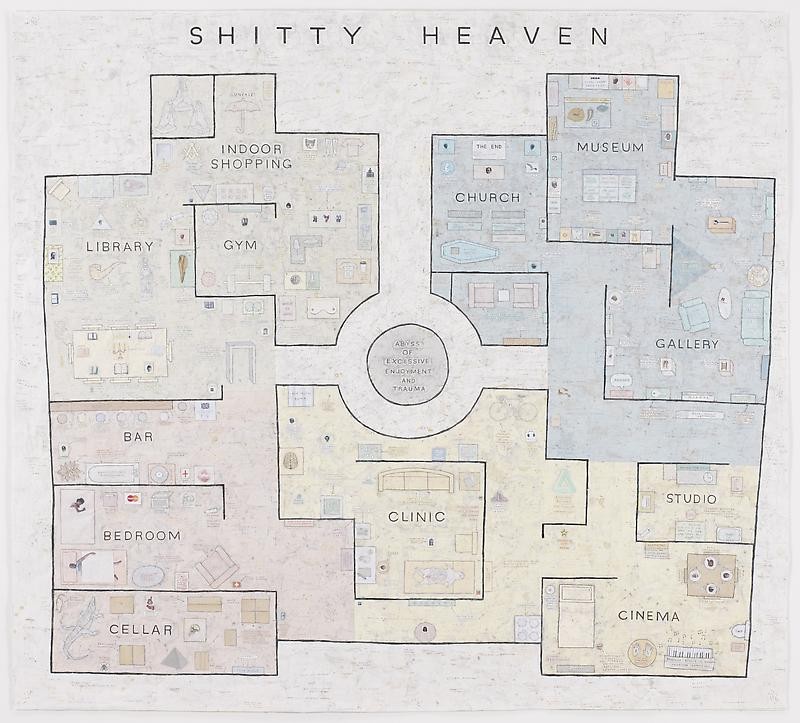 James Cohan Gallery is pleased to present Shitty Heaven, our second solo exhibition by Simon Evans, opening May 12th and running through June 11th, 2011. Evans meticulously assembles prosaic materials, such as scraps of paper, scotch tape, pencil shavings and correction fluid into diagrams, maps, flowcharts and diary entries that obsessively catalogue the fragments of a life. In 12 new text-based drawings, weavings and embroideries, the artist shares his confessional, idiosyncratic and wickedly humorous observations.

The exhibition’s title work, Shitty Heaven, envisions the other world as a planned suburban community, complete with its Gym, Clinic, Gallery and Church. At the center of this floor plan is the “Abyss of Excessive Enjoyment and Trauma,” anchoring a dystopic heaven where “things just happen and people blow apart, “comfortable places are overrun with rats and escaped slaves” and “you can tell your therapist everything.” The Bedroom is home to “freedom from night which is not to imply death,” while Indoor Shopping is fraught with “unease” and “dead relatives live through the money they have left” in the Gym.

A series of drawings of handwritten text radiating outward to repeat the title words The Hand, Positive Outcomes and The Voice marks a new exploration for the artist. Painstakingly crafted, these works function as a yantra or visual energy diagram traditionally used to direct focus during meditation or occult rituals. Evans’ first tapestry work, Letter to the Future, replicates the appearance of handwriting on a sheet of legal paper with carefully hand-stitched words addressed to the Future, describing a past when “they had blunt tools and everyone was lazy,” and signed from William Shakespeare.

In other works on view, Evans attempts to create a master chart sorting out all the people he knows in Everyone; aggregate a lexicon of universal icons in Vocabulary; and diagram out his own tongue-in-cheek version of Maslow’s hierarchy of needs in Survival. For a preview of the exhibition, please visit Shitty Heaven.