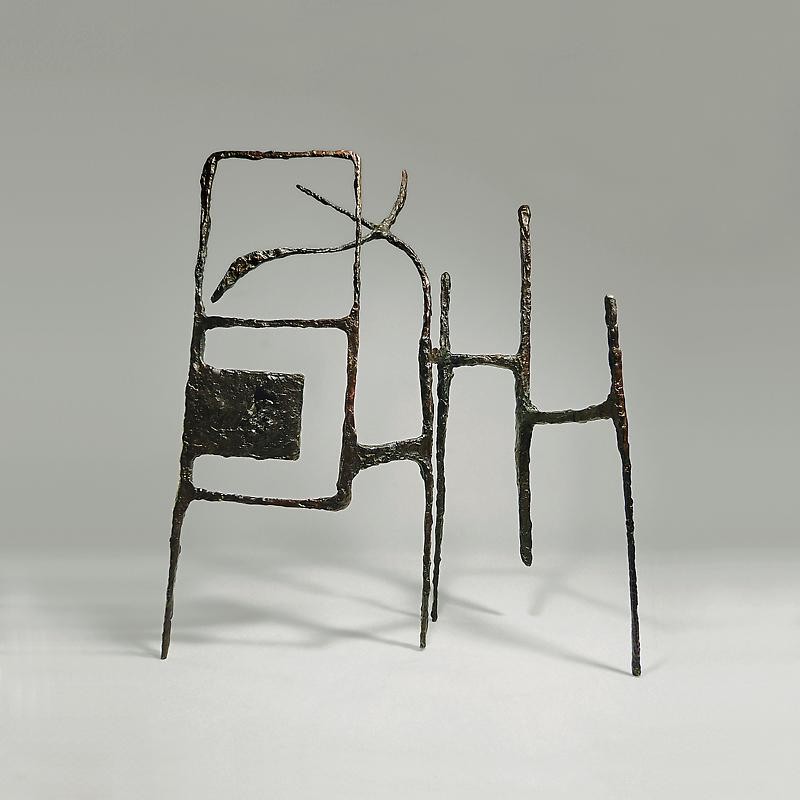 James Cohan Gallery is pleased to present Subject Verb Object, a solo exhibition by Shanghai-based artist WANG XIEDA, opening on January 10th and running through February 9th, 2013. This is the artist’s first solo exhibition in the United States.

On view are sculptures by Wang Xieda in both cast bronze and paper pulp. Xieda has spent the past 20 years studying the history of Chinese written language, specifically focusing on Chinese calligraphy of the fourth century, a period in which the brush came to be used for writing as an alternative to carving characters into wood, bamboo, or stone. Chinese writing evolved through the development of pictographs (which depicted objects) or ideographs (which represented abstract notions) and the bronze sculptures from the artist’s series Sages’ Sayings derive from these ancient forms.

In the main gallery, the bronze works are installed on long pedestals where they resonate in visual phrases—the “sayings” suggested by the title of the series. Chinese grammar, similar to English, employs a subject, a verb, and an object in the construction of sentences. However in Chinese, other parts of speech, such as measure words and suffix syllables like “ma” or “le,” exist to connote suggestion or questions. It is through calligraphy that the ancient Chinese visually expressed the many intricacies of the written word. In finding a contemporary approach, Xieda has brought calligraphy into three-dimensional space, continuing the impulse, intact from ancient times, to expand upon the expressive capability of language. Minimal and elegant, there is a formal kinship with the Modernist geometry of David Smith and the texture, negative space and shadow play of Alberto Giacometti. Conceptually, however, the sculptures speak to the artist’s pursuit to reveal the common human experience as communicated through the origins of language.

Additionally on display are recent unique works made from rattan and paper pulp. These works delve into formal investigations of how sculpture can become an extension of space. Suspended in mid air, these sculptures rely on the intangible elements of light and shadow to complete them, thereby addressing what might be considered a fourth dimension of seeing. The contrast of positive and negative, dark and light, inside and outside, and reality and illusion are all at play in these works.

*DURING THE RECEPTION ON JANUARY 10TH, JAMES COHAN GALLERY WILL HOST AN INTIMATE CONVERSATION WTIH WANG XIEDA, INTERVIEWED BY DR. AGNES HSU, A LONG-TIME INTERNATIONAL EXPERT TO UNESCO ON ARTS AND CULTURE AND THE HOST OF HISTORY CHANNEL ASIA'S NEW SERIES "MYSTERIES OF CHINA." THIS EVENT WILL TAKE PLACE FROM 6:15 TO 7:00PM. FREE AND OPEN TO THE PUBLIC.
www.jamescohan.com