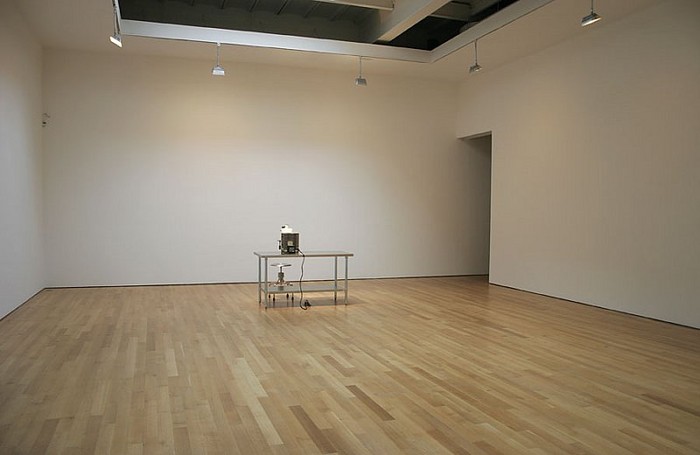 James Cohan Gallery is pleased to present an exhibition by Chinese artist Xu Zhen. This is the artist's first New York solo exhibition. Xu has become well known in recent years for creating videos, installations, photographs and performances that challenge common perceptions of "truth." His coyly provocative works draw our attention to ideas about territory and possession.

The exhibition at James Cohan Gallery will include three works. Featured in the main gallery will be a spare new sculpture entitled It, consisting of a tiny speck of mud viewable through a microscope. One viewer at a time discovers that the minute sculpture depicts the famous image of Neil Armstrong's first footprint on the moon. With this installation, Xu Zhen continues his ongoing investigation of fact and fiction by referencing the controversial debate over the 1969 Apollo 11 lunar landing. Various conspiracy theorists claim that during the Cold War era, the United States government faked the American lunar landing in its haste to beat the Soviet Union to the moon. Thus, by creating a faux artifact from a possible non-event, Xu highlights the media's role in directing modern-day history and poses the question: where do we stand?

The exhibition will also feature two of Xu Zhen's recent video works, 18 Days, 2006 and 8848-1.86, 2005. In the premiere installation of 8848-1.86 at the 2005 Yokohama International Triennale in Japan, a "documentary" video showed the artist and a team of expert climbers sawing off a 1.86 meter tip of Mount Everest; the verisimilitude of this feat was underscored by the installation of a refrigerated case that enclosed the icy mountain peak (not included in this exhibition). The skeptical audience in Yokohama was further confused by a coincidental Chinese news report that the mountain's height was 4 meters less than its previous measurement of 8,848 meters. As Hans Ulrich Obrist summarizes, "it is precisely this slippery character of socially accepted reality that Xu calls 'mobile public fact,' something the artist addresses often in a practice that is noticeable for its political punch."

18 Days, another video produced in documentary style, records a collaborative trip the artist took with a group of friends in 2006, during which he planned to "invade" China's neighboring countries Myanmar, Mongolia and Russia. A series of mishaps and unsuccessful attempts finally resulted in a successful crossing at the border with Myanmar; an invasion we are told in a voice-over that was achieved with an arsenal of remote-control operated toy weapons.

Most recently, at the 2007 Art Basel Miami Beach art fair, Xu created an exact replica of a Shanghai convenience store in which all of the objects for sale were real product packaging emptied of their content. Complete with a cash register and uniformed employees, the installation was not only transportative, but was also a clever commentary on the commercial context of the art fair.

His work has been shown internationally and was recently included in Performa07, NY; the 10th International Istanbul Biennial (2007); Art Unlimited 2007 at ArtBasel 38; China Power Station: Part II, Astrup Fearnley Museum of Modern Art, Oslo, Norway (2007); and The Real Thing – Contemporary Art from China at Tate Liverpool (2007). Xu was also included in the 49th Venice Biennale (2001) and represented China at the 51st Venice Biennale (2005). Xu Zhen was born in 1977 and lives and works in Shanghai.
www.jamescohan.com