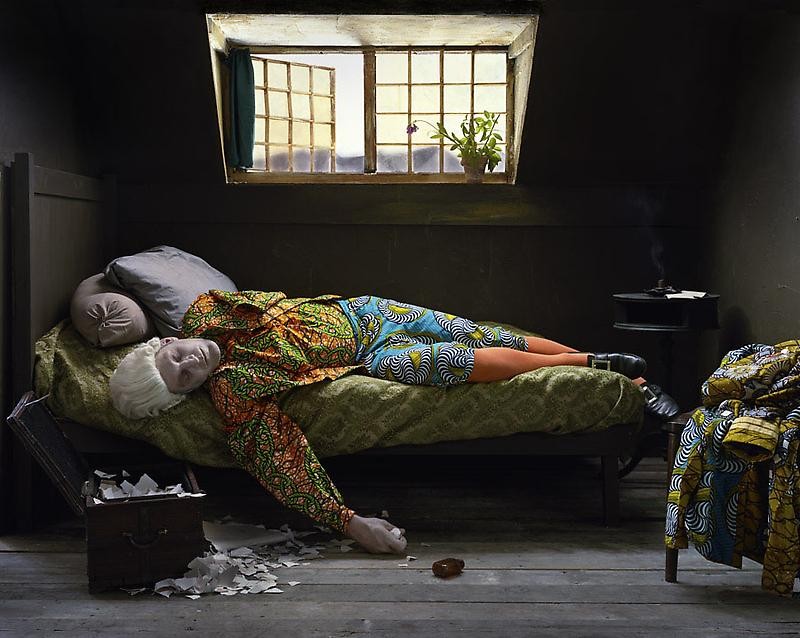 James Cohan Gallery is pleased to present an exhibition of new works by British-born Nigerian artist Yinka Shonibare MBE opening February 16th and running through March 24th. In this multi-part exhibition of new sculptures, photoworks and the premiere of a new film, Shonibare explores the concept of destiny as it relates to themes of desire, yearning, love, power and sexual repression.

Yinka Shonibare, well known for creating multi-faceted conceptual art work, continues to draw our attention to patterns of history and how they are repeated in our own time. Following the installation of the artist’s widely acclaimed work Nelson’s Ship in a Bottle on the Fourth Plinth in Trafalgar Square, London, Shonibare continues his explorations of Lord Nelson, the figurehead of the British Empire at its apotheosis. Nelson’s destiny was to fall a hero at the Battle of Trafalgar just as the British Empire’s ultimate destiny became its inevitable demise. Shonibare sees a similar fate reflected on the front pages of today’s newspapers: “The Imperial West is in decline at a time of great economic challenges as we see the rise of the East. The old world is in decline and new worlds are emerging through the economic successes of China and India and the revolutions in the Arab world. We are re-experiencing a new Age of the 'Decline and Fall of the Roman Empire'.”

The main gallery will feature a series of five new photoworks entitled Fake Death Pictures. The artist refers to this series as “a re-enactment of suicide through the history of death in Painting.” Shonibare imagines a dramatized vision of the tragic event of Nelson’s death as played out over a series of five photographic allegories based on classic scenes in painting. The series brings together painting, stage design and photography to create works in the manner of The Suicide by Leonardo Alenza y Nieto (1839) and Édouard Manet (1877), The Death of Chatterton by Henry Wallis (1856), Death of St. Francis by Bartolomé Carducho (1593), and Death of Leonardo da Vinci by François-Guillaume Ménageot (1781).

Two sculptural installations of costumes constructed in period details with Shonibare’s signature patterned fabric will be displayed alongside the photographs in the main gallery space. Although this fabric has become a signifier of “Africanness”, it is in fact a textile produced by the Dutch with patterns influenced by Indonesian batiks. And therein lays the irony: despite the misunderstanding surrounding the fabric’s cultural origins, it has come to represent a true African identity. The significance of the fabric has provided a conceptual underpinning in Shonibare’s practice since its beginnings.

In the back gallery on view is the film Addio Del Passato (“so closes my sad story”) in which the character of Frances Nisbet, Lord Nelson’s estranged wife, sings the eponymous aria from the last act of Verdi’s opera La Traviata. Shonibare finds a parallel in the story of Nelson’s betrayal of his wife and his passionate love affair with Lady Hamilton to the feelings of loss and yearning as expressed by the opera’s heroine Violetta on the eve of her death.

On display in the front gallery will be three sculptures of fetish objects and sex aids from bygone eras. With characteristic wit, Shonibare presents his audience with two reproductions of anti-masturbation devices—one for women and one for men—that are fascinating objects of beauty and horror. Complementing the array will be a pair of fetish boots whose improbable proportions connote both domination and submission.

Yinka Shonibare MBE (b.1962) lives and works in London, UK. He received the prestigious Fourth Plinth Commission in Trafalgar Square from the mayor of London in 2009, and his midcareer survey exhibition originated in 2008 at the MCA Sydney, Australia and traveled to the Brooklyn Museum of Art and the National Museum of African Art, Smithsonian through 2009. Upcoming in 2012 are two important public art commissions in London to be announced shortly. Shonibare was awarded the title of Member of the British Empire in 2005. His work was included in the African pavilion at the 52nd Venice Biennale in 2007 and he was a Turner Prize finalist in 2004.
www.jamescohan.com