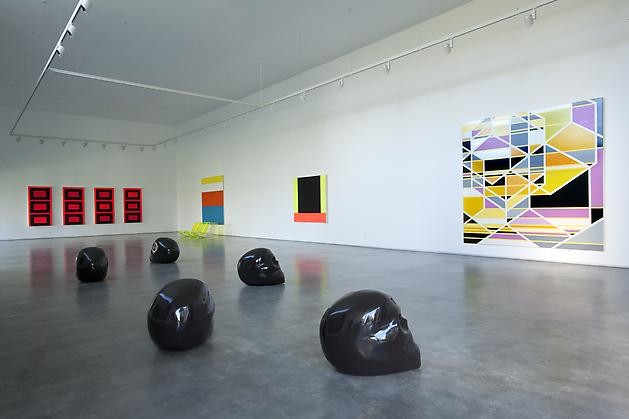 The Galería Javier López is launching its new exhibition season with a group project that brings into play works by the gallery’s artists who have clearly been influenced by Minimalism. These artists establish a relationship across the distance of the fifty years that have passed since the birth of a movement from the founder to those who still find inspiration and new interpretations in its objectivity. Starting with the renowned figure of Donald Judd, one of the movement’s leading exponents, the exhibition leads the visitor through a survey of various forms of artistic expression linked to this trend, including the reappraisal carried out by some of his followers such as John M. Armleder and Peter Halley. Other artists have extended the concept of minimal art, deepening its interest through perceptual experience, as in the case of Liam Gillick and Leo Villareal, or by updating the ruling principles of formal simplicity, as Sarah Morris and Xavier Veilhan do.

The term ‘Minimal Art’ was first used in 1965 by the art philosopher Richard Wollheim to refer to the work of artists from the first half of the twentieth century who had minimised the artistic content of their work. In the early sixties some American artists displayed object-works that baffled both the public and critics and ended up having this label applied to them. Faced with an art scene dominated by abstract expressionist painting and Pop Art, the minimalists chose economy of means to achieve maximum order with a minimum of signifying elements and applied the premise ‘less is more’ to their choice of material, form, colour and construction process.

Minimalist propositions present a basic and synthetic vocabulary based on modules or elementary geometric structures aligned in an simple way—usually in series—giving rise to compositions that are not relational or hierarchical. On the technical side, they appropriate the materials already on offer from industrial processes, with little or no manipulation by the artist, thus giving prominence to the artistic concept as opposed to the execution. Since the works are self-referential, they enact a precise perception within a given context. The anti-illusionism and objectualism that characterise these installations led to a questioning of traditional genres and to establishing a more direct link between a work, its space and the viewer.

As minimalist works reflect the way of life and currents of thought in their times, so later generations of artists have adapted some of the principles that they inherited from this movement in their own approaches to the society and culture of their day. The dialogue between the different parts that make up the whole of the exhibition begins with a wall piece by Donald Judd, which is echoed in the cold and rectilinear forms of Peter Halley and the architectural discourse of Sarah Morris. In the same vein of geometric abstraction, José María Yturralde has pursued his exploration of the links between science and art, examining the limits of painting through the expressiveness of colour and light in space. Leo Villareal uses technology to create sensory experiences with light installations that exist halfway between sculpture and painting, while Liam Gillick, a self-styled ‘object-maker’, is concerned with the qualities of materials and how properties of colour and structure influence perception of our surroundings. The dilemma of object-ness is picked up by John M. Armleder who, in his ‘furniture-sculptures’, combines everyday objects with painting. Finally, Xavier Veilhan uses materials such as polyester and polyurethane resins or polished stainless steel to create sculptures where he plays with scale and simplification of form in a reinterpretation of the genre and its conventions.
www.javierlopezferfrances.com