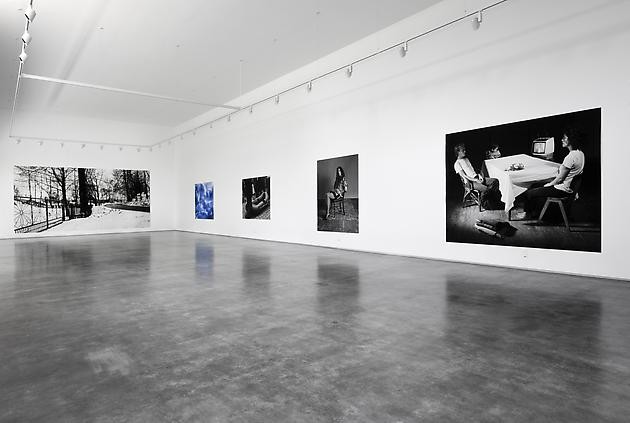 Galería Javier López is pleased to present an exhibition of works by British artist, Hannah Collins (London, 1956). In “Rock, Paper, Scissors,” the gallery brings together a selection of examples from different series, which she initiated during the last three decades and has continually updated. This images look at the photographic surface as a way of describing the relationship between humans and their surrounding environment - through the filter of history and the rhythms of everyday life. This exhibit - the sixth solo show with the gallery - brings together large format panoramic works on a mural scale with smaller and more intimate images. As for the technique, the images are made using a large format plate camera and printed on cotton paper or canvas using pigments.

Works from distinct series allow the artist’s ongoing pre-occupations in the pieces to surface. Many of the images present connections to both consumption and an alternate dream world whilst at the same time being based in the everyday and maintaining a bond to nature. The works selected for this exhibit provide a multi-layer atmosphere for the viewer to wander through as a work from one series provides a connection and a point of reference for a work from another - in one work ‘The Road to Auschwitz,’ trees shown in fine detail move upward through the monochrome space, beside this an image made in Calcutta during the monsoon shows a blurred, hazy and dream-like landscape dotted with coloured trees.

Hannah Collins is part of the current discourse around the photographic image as it has developed within contemporary art. Collins’s periodically re-views and re-works her pieces, re-contextualizing them and bringing them into the present. For example, ‘Clouds’ presents a composition of the sky shot twenty-five years ago the image mirrors Alfred Stieglitz historic Cloud series made during the first attempts to acknowledge photographic images as art. In this case, the image has been revised and adapted to open up a world of colour, the Yves Klein’s blue, staying as far from nature as it first did as a black and white image.

Hannah Collins’s work expresses her concerns about time and the subsequent traces that its progression leaves upon people, objects and landscapes. It is this context that frames her series ‘In the Course of Time’ work made in post-soviet Poland. ‘The Road to Auschwitz’, one of the works on show, belongs to this series. The long panoramic photograph comprises a road that lead to a Nazi concentration camp dominated by snow which whites out the details of the ground leaving a gate, signs with no message and delicate branches of living trees to cover the upper surface of the print. Whilst Collins’s work ‘Sex 2’ calls for a reflection over life and death in an image of oysters opened and ready for consumption, ‘Signs of Life (Section)’ shows a Soviet made inflatable lifeboat left lying on a street in Istanbul.

Hannah Collins’s work is well represented in numerous public collections, amongst them are: La Maison Européenne de la Photographie and Centre Pompidou in Paris, Tate Gallery and Victoria and Albert Museum in London, MACBA in Barcelona, MNCARS and CA2M in Madrid. In parallel to her photography she has produced films that have been projected in galleries, institutions, festivals and movie theatres in Europe and the United States. Her latest project, the book “The Fragile Feast. Routes to Ferran Adrià” (Hatje Cantz, 2011) looks at the way food is collected from all over the world and transformed by the chef, has been shown in Madrid, Barcelona, Paris and New York. The artist has just been awarded The Spectrum Prize by the Sprengel Museum in Hannover for her development and contribution to the discipline of photography.
www.javierlopezferfrances.com