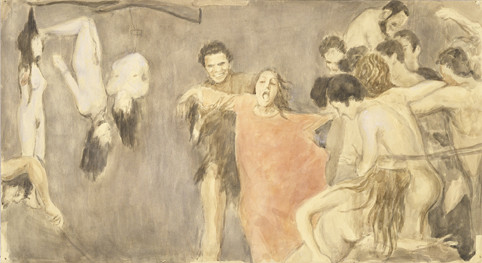 The work of Adrian Paci (born in 1969 in Albania) underlines one of the paradoxes of human intelligence, which consists of becoming aware of reality through irreality. Often inspired by subjects close to him, stories arising from his everyday life, Adrian Paci lets them slide poetically towards a fiction, which in its turn creates one or more wider realities. The exhibition at the Jeu de Paume gathers extremely diverse works (videos, installations, paintings, photographs and sculptures) made since 1997 and shows the numerous interconnections that operate between these different media and means of expression.

Paci’s work is characterised by its capacity to create a tension between the conflictual and the marvellous. With a certain romanticism, he is conscious of the stakes at play between contemporary artistic creation and possible forms of resistance.

In 1997, Adrian Paci escaped violent riots in Albania to take refuge, with his family, in Italy. On his arrival in the country, he temporarily abandoned painting and sculpture in favour of video, thus exploring new cinematic languages and means of expression. His experience of exile, the shock of separation and adaptation to a new place define the context of his first videos, through which he attempts to discover the roots of his past.

“The fact of being at a crossroads, at the frontier of two separate identities, underlies all my work on film.” (Adrian Paci)

Gradually, Adrian Paci has distanced himself from his personal experience to treat collective history, in projects that put the emphasis on the consequences of conflicts and social revolutions, revealing how identity is conditioned by the socio-economic context. Working with non-professional actors, men and women in difficulty, he explores many of the existential and social problems of our epoch: migration, mobility, loss, displacement, globalization, cultural identity, nostalgia, memory...

After representing Albania at the Venice Biennale in 1999 and exhibiting at the MoMa PS1 in New York in 2005, his work has been the subject of numerous solo exhibitions: Moderna Museet in Stockholm, Kunstverein, Hanover, Tel Aviv contemporary art centre, Bloomberg Space in London and Kunsthaus Zurich. Among numerous group shows, he has participated in Manifesta 3 in Ljubljana (2000), Venice Biennale (2005), Tate Modern, London (2008), Maxxi Rome, Lyon Biennial and Havana Biennial (2011).

His training as a painter permeates his videos and photographs, where light and chiaroscuro hold a symbolic role, Adrian Paci is also particularly attracted by portraiture, which he uses magnificently in the videos Centro di Permanenza Temporanea, 2007, and Electric Blue, 2010.
The tension between the moving image and the fixed image is at the heart of an approach founded on the principle of “the continual movement from reality to the metaphorical”. Along with a selection of early works (Albanian Stories, 1997; Home to go, 2001; Piktori, 2002; Vajtojca, 2002...), Adrian Paci presents recent pieces, including The Encounter, 2011, Inside the Circle, 2011, and The Column, a video installation created specifically for his exhibition at the Jeu de Paume, accompanied by the marble column presented in the Jardin des Tuileries to the right of the entrance.
www.jeudepaume.org