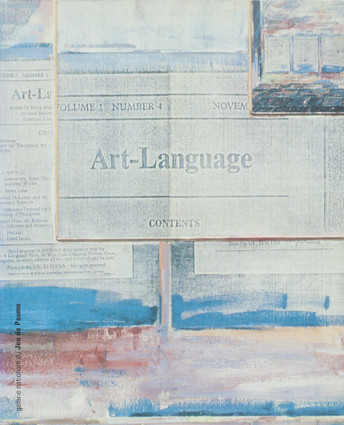 For the sixth edition of its Satellite programme, the Jeu de Paume has invited curator Mathieu Copeland. Conceived as part of the “Suite for Exhibition(s) and Publication(s),” “An exhibition – An Event” will be presented at the Jeu de Paume from 28 May to 1 September 2013. It will echo the two movements “A Spoken Word Exhibition” and “An Exhibition Without Texts,” which were presented respectively at the Jeu de Paume and the Maison d’Art Bernard Anthonioz. This exhibition examines the moment when the image becomes an abstraction of itself until it disappears in favor of the event. The event should be envisaged in its widest sense: a musical score of an event, a suggested reading, or an action that takes place in the ancillary spaces allocated to the Satellite program. Mathieu Copeland’s proposal explores what happens in neutral contexts and how a formal presence is activated in them.

An exhibition, once it has run its course, crystallizes into the products that it generated, in the recollection of those who experienced it, and also in its catalogue, which generally provides details about the works on display. The exhibition catalogue “reproduces” images of the objects that contributed to its existence and/or views of it. It is thus, at best, a memory of it; at worst, it is nothing more than a checklist of it.
This “reprise” of the “Art & Language” exhibition, which took place at the Jeu de Paume between November 9, 1993 and January 2, 1994, reflects as much a desire to revisit the memory of this event as a desire to give it a new reality. Without any works even being shown, the past event is envisaged anew through a reading of its catalogue, which is used as a score. Broadcast in the rooms, the sound recording (engineered by Jonathan Reig) of the entire book—read in French by Olivier Claverie and in English by Kate Lith—permits a new understanding of this exhibition and its relation to the text. However, it restores only a distant echo of the original, affirming the exhibition as constantly expanding material which, as such, can be reprised weeks, months or even years later, in various contexts. Through this “projected” (re)reading, which constitutes a new event in itself, the catalogue thus becomes the libretto of an exhibition that is constantly in becoming.
In parallel, the publication of the collection of poems Life as a Cheap Suitcase, for which Genesis Breyer P-Orridge, a pioneer of industrial music, was given carte blanche, goes beyond the concept of the catalogue as a representation of the exhibition in book form. This publication, to the extent that it conveys the feeling of it, is ultimately both a mirror and a continuation of the exhibition.

A Film to Be Read
In the auditorium, an exhibition of the words is projected continuously in the form of a “film to be read,” consisting of a succession of artists’ texts written specifically for it.
The description of the feeling of a work by Robert Barry, a script of women’s words by Betty Tompkins, a shared secret by Pratchaya Phinthong, a film noir by Mac Adams, a suspended sentence by Liam Gillick, a prediction of time by Oriol Vilanova, an abstract computer poem by Claude Closky, a mental journey with Georgia Sagri, the use of text by Julien Bismuth to make images “appear,” a polyphony by Cally Spooner and the transformation of the dark room of the cinema into an internal theatre by Fia Backström— all these works are intertwined in a string of words created by Peter Downsbrough. Unified by their typography, the texts are both the subtitles of a film without images and mental projections constructed in the mind of the person reading them.