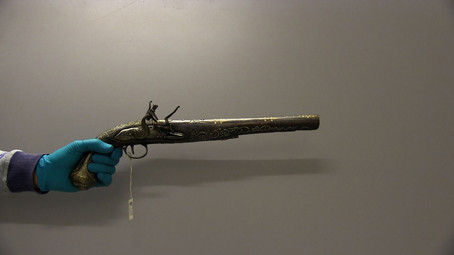 Research in anthropology, literature and archives lies at the heart of Kapwani Kiwanga’s work, which is informed by Afrofuturism, the anti-colonial struggle and its memory, belief systems, and vernacular and popular culture, as well as different cultural ways of approaching the invisible, intangible aspects of the magical and the supernatural. In her films, installations and performances, which revolve around notions of belief and its relationship to “knowledge”, Kapwani Kiwanga employs documentary modes of representation, various material sources, and testimonies of a subjective as well as a quasi scientific kind. She is also interested in different approaches to embodiment in art, most notably in her Afrogalactica trilogy project (2011–ongoing), for which she has invented the character of an anthropologist from the future, a protagonist who ranges across vast fields of knowledge relating to Afrofuturism as a historical movement, hybrid genders and African astronomy.

Kapwani Kiwanga’s exhibition “Maji Maji” draws on the historical account of the“Maji Maji War, which took place between 1905 and 1907 and was one of the largest uprisings on the African continent at the beginning of the twentieth century. The revolt against German rule was initiated by a spiritual medium named Kinjiketile, also known by the name Bokero. After being possessed by the spirit Hongo, he attracted a large following, and distributed sacred water, or maji, that was to protect them by transforming German bullets into water. MAJI MAJI fighters’ belief in the supernatural was a means to galvanise the insurrection, which was fundamentally a belief in the possibility of creating another social order. However, the maji did not safeguard them and many African lives were lost.

In her exhibition, Kapwani Kiwanga focuses on the voids present in the living memory of the “Maji Maji" War and its material traces, as well as the supernatural imagination that encompasses and contextualises it. As she says, voids are felt often because the presence of other things marks their absence. As in the question of void and presence, the supernatural also has a dual capacity to protect or assault. Kapwani adopts an empathic approach to the subject, making the spectators feel and imagine these ungraspable, inaccessible, vanished voids. The absence is thus made into a constituent element of a story being retold, through evoking the power of the oral, of the broken and fragmented. Historical and contemporary ways of studying something frequently imply dissecting, placing into boxes and labelling. In so doing, one creates categories and meaning, filing and storing them in an ordered system. Another approach is to narrate it through myth and anecdotes, recollection and hearsay. By conceiving the exhibition as a subjective archive through which the artist queries the act of compiling, organising and categorising, she mixes a narrative, and subjective ordering that rejects the illusion of totality or exhaustiveness. The shelving system in the exhibition space thus leaves empty space for the presence of the immaterial and the phantoms of absent pieces, while proposing found objects and videos as traces of the artist’s research.