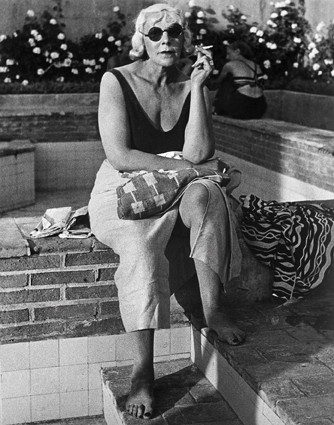 If Lisette Model took up photography as a way of earning a living, it is also true that she always fought for her own subjects, rather than simply carry out the assignments given by editors. She believed that for a photograph to be successful its subject had to be something that “hits you in the stomach.” This could be something familiar or something unfamiliar. For Model, the camera was an instrument for probing the world, a way of capturing aspects of a permanently changing reality that otherwise we would fail to see.
Model always said that she looked but did not judge. Yes, her photographs of the Promenade des Anglais in Nice were published by the left-wing journal Regards, in 1935, but she was not interested exclusively either in the rich or in the poor, and her images are much more about human relations. Her work evinces empathy, curiosity, compassion and admiration, and reflects the photographer’s attraction to voluminous forms, energy and liveliness, to emphatic gesture and expression: the world as stage. The critic Elizabeth McCausland has described Model’s camerawork as expressing “a subconscious revolt against the rules.”

This exhibition of some 120 of Lisette Model’s most representative photographs illustrates the very bold and direct approach to reality that made her one of the most singular proponents of street photography, the particular form of documentary photography that developed in New York during the 1940s, through the camerawork of such as Helen Levitt, Roy de Carava and Weegee.
Alongside the photographs, archive film and sound recordings of Lisette Model will evoke the photographer’s life, and there will be copies of magazines to which she contributed (Regards, Harper’s Bazaar, etc.).