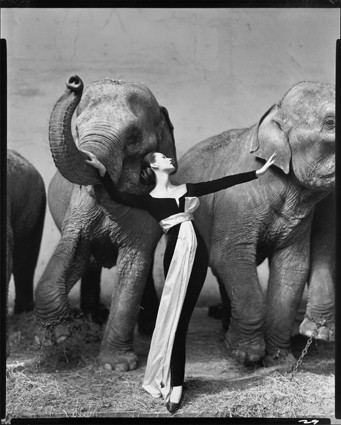 Organised by the Louisiana Museum in Humlebaek with the cooperation of the Richard Avedon Foundation, this exhibition surveys the whole of Richard Avedon's career, starting with his first steps as a fashion photographer at the end of the Second World War.
Avedon continued to photograph the creations of the big Parisian couture houses up until 1984, working first for Harper's Bazaar and then for Vogue. Finding fashion photography too static and stuffy, he transformed it by introducing movement and photographing his models in public spaces.
He also made many portraits of celebrities from the worlds of literature, art and show business, always taking care to shatter the icon in order to reveal the true personality behind the public image.

In the 1960s, Avedon also ventured into photojournalism, covering such hot subjects as Civil Rights campaigners in the American South (1963), the Ku Klux Klan, patients in a mental hospital and the Vietnam war — both in the country itself, where he photographed military officers and napalm victims, and back home, where, a pacifist himself, he covered the hippie protests against the war.

In 1974 Avedon exhibited a series of his father, then dying of cancer, at the Museum of Modern Art in New York. During this decade he continued his fashion photography and reportage, and also produced a series of 73 portraits of America's political elite for Rolling Stone.

The early 1980s saw Avedon produce a long series of 700 portraits of middle class and poor Americans from the 17 western states. As if to refute the myth of the American West, these portraits, all taken outdoors against a white ground, show closed, tense and introverted faces with an intense but subjacent emotional power. At the end of the decade, a commission from the French magazine Égoïste gave Avedon the chance to cover the fall of the Berlin Wall.
www.jeudepaume.org