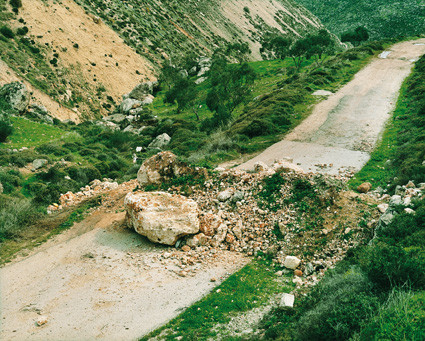 Sophie Ristelhueber (born 1949) lives in Paris, where she studied literature and worked as a journalist before deciding to devote herself to photography.
For more than twenty years now, she has been working on the notion of the territory and its history, by paying special attention to ruins and the traces left by man in places devastated by war. Working far from conventional photojournalism, she focuses on revealing events and the marks of history, both on bodies and on landscapes. She reveals the wounds and scars that are the physical chronicle of trauma.
In this, her first major exhibition in France, Jeu de Paume will present a number of her series – “Beirut,” “Vulaines,” “Fact,” "Eleven Blowups" together with two new films, one of them specially conceived for the show.
Curated by the artist with Marta Gili, director of Jeu de Paume
In partnership with A Nous, De l'Air, evene.fr, Libération and Paris Première
www.jeudepaume.org