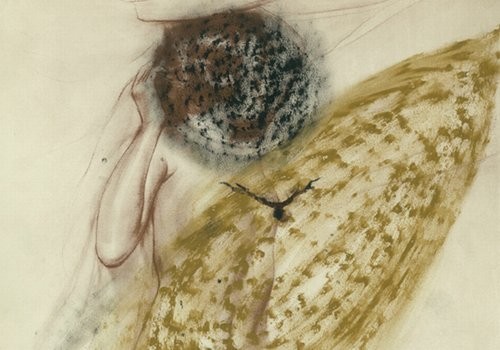 Thomas Helbig is one of the most outstanding artists from the young generation of the Contemporary Art scene. His first solo exhibition in Prague will be hosted by the Jiri Svestka Gallery from September 10 till Ocotber 30, 2010.
Although Thomas Helbig (born 1967 in Rosenheim) studied primarily painting (AdBK, Munich and Goldsmiths College, London), his artistic practice typically incorporates various disciplines, with equal emphasis on each, including sculpture, drawing and painting.
For his first solo exhibition at Jiri Svestka Gallery Thomas Helbig will exhibit a new series of drawings, paintings and sculptures. With references to the Russian Avantgarde as well as Surrealist practices, Helbig seems to engage with, and subvert, the languages of modernism they encompass. This is perhaps most apparent in Helbig‟s overpaintings of found paintings and wall decorations. He has described the effect this has as „discovering something through concealment‟ or „making something visible through encryption.‟ Often, through this process of reworking, forms are organically revealed so that a process of transmogrification takes place. In other works, found portraits have had their faces blackened and smeared by paint, with the saturation of the canvas seemingly having occurred with such violence that the drips left by the application of paint fall all the way down to the frame. The suggestion of gravity here, through the way material has been applied, is rarely a quality the forms in his paintings are burdened by.
Mostly the picture plain has a weightless quality as objects hover, suspended as if by extraneous forces. For Helbig the concept of suspension is closely connected to the Baroque and the way dramatic use of light and illusory effects like trompe l‟oeil are used in the churches of Helbig‟s native Upper Bavaria to create greater spiritual affinity.
Helbig‟s paintings and sculptures are often borne out of earlier drawings. Torn from the pages of his sketchbook, his drawings appear to have a spiritual affinity to Surrealist automatic drawings and contain rapid flecks of colour, ominous shapes and faint references to mythological icons through the use of form and symbolism. In Helbig‟s sculptures paint, resin and polyurethrane cover partially destroyed statue heads, tree roots and an array of thrift shop and castaway objects that have been dissolved, flattened and broken down to forms barely recognizable of the structures they once were. Coagulated and yet perceivably mutable Helbig‟s sculptures seem to have a life force of their own, watching over the gallery space they act as arresting punctuation from the contemplative reverie that Helbig‟s paintings invoke.
“I feel as if I am standing before these sculptures and paintings as if before a human sediment of state representation. And it is as if the meaning of this representation has flown away into the aura of heroic places and gentlemen‟s smoking rooms of the 19th century. And the fact that I can imagine national folk tradition as something detached, that the wild appearance of the shapes is trapped in their stature, points still further back into a space beyond the bourgeoisie, a space where the violence of common people‟s life and the loneliness of power face each other head on.” wrote Berthold Reiß in a catalogue to one of Helbigs exhibitions.
In the current issue of one of the most important magazines about Contemporary Art Artforum the critic Jens Asthoff compares Helbigs techniques to the Swedish artist from the beginning of the 20th century Hilma af Klint and also to the early occult techniques by Frantisek Kupka. This makes Helbigs exhibition even more up-to-date in the Czech context.
At the Jiri Svestka Gallery Thomas Helbigs art works were for the first time in the group exhibition Heretic & Co. in 2007. In the same year Thomas had a big solo exhibition at the Oldenburg Kunstverein. He works together with important international galleries as there are Guido W. Baudach in Berlin, Rüdiger Schöttle in Munich, Vilma Gold in London, Bartolami in New York and China Art Objects in Los Angeles. He has participated in group shows at Musée des Beaux-Arts, Tourcoing (2008), Tel Aviv Museum of Art, Tel Aviv (2008), Künstlerhaus Bethanien, Berlin (2008), ZKM, Karlsruhe (2007), Rubell Family Collection, Miami (2007), Tate Modern, London (2007), Goetz Collection, Munich (2006) and Oldenburger Kunstverein (2003). His works are in significant public and private collections all over the world, in the Czech Republic e. g. Richard Adam Collection in Brno.
www.jirisvestka.com