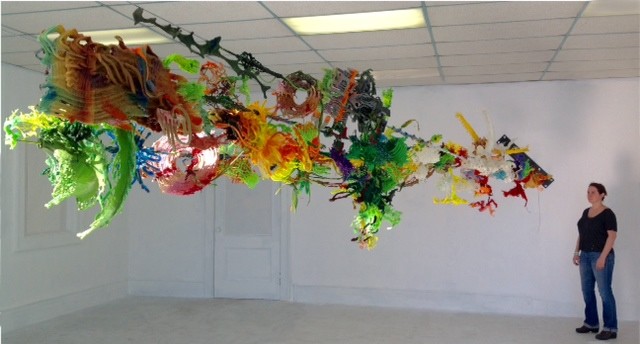 On March 31st we will open the new exhibition on Fabian Marcaccio’s work titled Family-Group-ClusterSwarm at Galeria Joan Prats showing his most recent work, 3 Dimensional paintings that behave like sculpture and installation.

As the starting point of the exhibition, Marcaccio researched specifically the meaning of family, group, cluster and swarm in society as well as in painting itself. The viewer is introduced in the first room by a swarm-like pictorial installation. Entering the main room, where a family, group, cluster of 3D works and rope paintings seem to tell a story.

Fabian Marcaccio has been one of the pioneers of digital painting in an attempt to redefine the pictorial genre, extend its temporal and spatial parameters, and track the integration of the hand-made and the machine-made. In the nineties, he worked with composition and digital printing and, later on 3D printing, to create pictorial works that he calls Paintants, a neologism from painting and mutant. Marcaccio considers painting as a constellation in content change, sometimes rendered as panels, sometimes as 3D configurations, sometimes as animations, and sometimes on an environmental scale.

Fabian Marcaccio was born in Rosario, Argentina, in 1963, and lives and works in New York since 1986. He has taken part in exhibitions at international art centers and museums. His recent exhibitions include Paintant Stories at Casa Daros, Rio de Janeiro (2014), Variants at Centro Atlántico de Arte Moderno CAAM, Las Palmas de Gran Canaria (2013), Some USA Stories at Museen Haus Lange / Haus Esters,
Krefeld, Germany (2012), The Structural Canvas Paintants at Lehmbruck Museum, Duisburg, Germany (2012) and at Georg Kolbe Museum, Berlin (2011). In 2011 he was awarded the Bernhard Heiliger Award for Sculpture.
www.galeriajoanprats.com