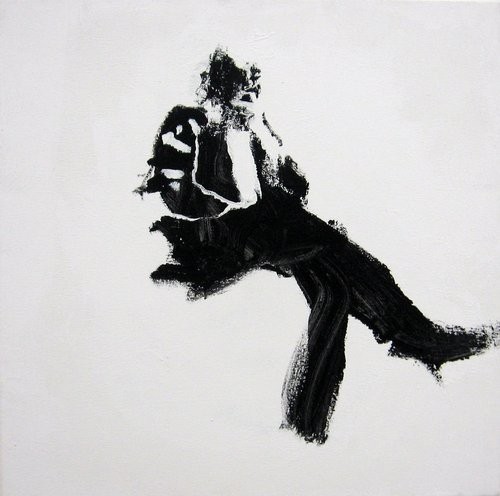 Tony Squance's first solo exhibition in Madrid was based on observations of people as they travelled to work in the underground system between six and seven o'clock in the morning; the paintings were based on sketches he made in situ.

Twelve years have passed since then. Architectural changes have been made; the trains are newer, the wagons are brighter, and the passages are wider. There is less dirt. There are gadgets to play with.

But little has changed in the bearing of the people observed, nor indeed of the observer.

Some of the photos taken were used as a launch pad for this small body of work.

Squance's paintings are now pared down to black figures on white ground. His seated figures sit on no structure; they project no shadow. Some clutch on to their bags, some sleep, some stare somewhere. If his figures stand, they stand on nothing, they hold on to no rail, and lean on nothing.