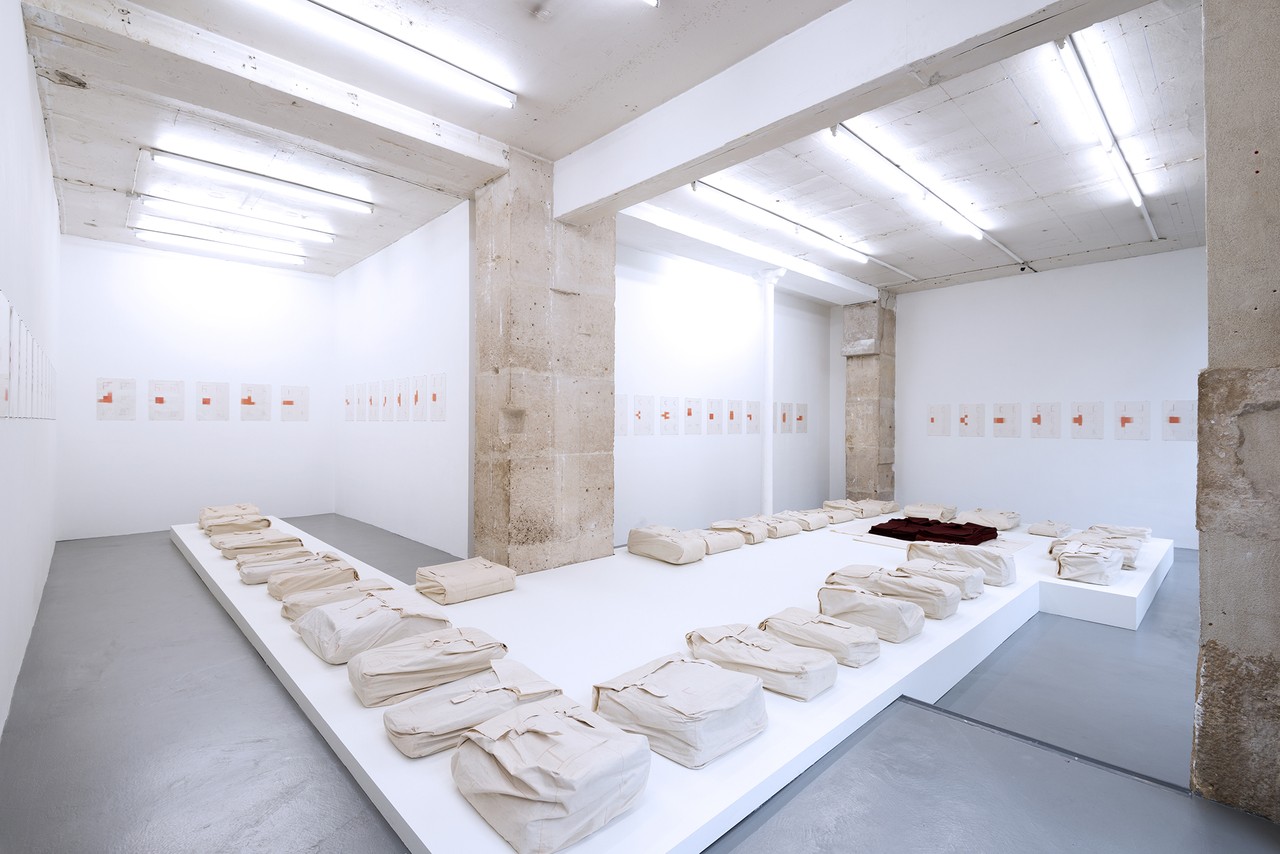 NW: Entering the gallery space I hear a recording of your voice giving performing (or should I say activation) instructions for Vier rechte Winkel mit Binnenfeld (Four right angles with enclosed field). Would you describe the piece, please?

FEW: First, you may use both terms, performing or activating the piece are equally correct. By the way it is not an instruction but the simulation of a real acting. Vier rechte Winkel mit Binnenfeld is an action path piece made of bordeaux-red cotton fabric, with sewn pockets along their seam. It measures 21 x 21 m and is conceived for an activation by four persons. The piece needs to be laid out on the ground, preferably on an outside space. It consists of four angles that are attached and form a square at their center. All four participants begin at one of the two ends of their angle. The activation is done step by step, one foot follows the other sideways, each person chosing his/her own time frame. This way, time and space are articulated. After covering one third of the total distance, the participants reach a point where the track of one participant either runs into or crosses another's own track. The inner field remains untouched. Each participant refers in the first instance to the far distance, then to the enclosed field and finally to a laterally limited adjacent field, or in the reverse order. The participants relate to the surrounding as well as to each other.

NW: Vier rechte Winkel mit Binnenfeld is part of the series named Schreitbahnen (stride paths), consisting of 36 works, that you conceived in the year 1972. How do they differ from each other?

FEW: Lets speak about what they have in common first. Their fabric pockets and the fact that they are all minimal floor pieces is one aspect in common; and all are related to the idea of time and space. While working on the first pieces, it became clear that different activations created different relations to the inner and to the outer space, to a change of directions, and to the other participants. I sat down and drew all possible shapes as simply as possible. I had to find a basic measurement module related to classical ideas of proportion. The basic module turned out to be 16m. The stride paths have often been exhibited, and mostly, as seen here in the gallery, in their storage state. I see the storage state as a valid work situation. The activation of a piece is imagined from the viewer by means of a drawing and the written work definition, as you can see here on the back wall. This is the reason the drawings are of such importance.

NW: What is the key element of your art practice?

FEW: That I trust in the ability of people to imagine form and shape and thus to create an art work.

NW: Time factors into your art work – how?

FEW: In acting with the pieces one transforms real time into a material to sculpt with.

NW: The series of Schreitbahnen have been outlined as a continuation of the 1. Werksatz (First Work Set) from 1963-1969. What is the 1. Werksatz and how do the stride paths succeed them?

FEW: The 1. Werksatz (1963-1969) is a set of process-inducing objects, sewn from dyed and undyed cotton fabric. They introduce my concept of sculpture combining geometrical forms with simple sequences of movement, thus making the viewer to an integral part of the work. In 1972 I wanted to start a 2. Werksatz (Second Work Set) and titled the stride paths as such. But after some time I decided the term 36 Schreitbahnen to be more objective.

Both set of works have in common their activation. In case of the 58 elements of the 1. Werksatz the elements each have a different theme and definition of time and space, and their articulation varies the position of the body in relation to time and space. Whereas in case of the 36 stride parths the activation is a like but each stride path organizes a different relation to its inner and outer space and time. Also for me a momentum of architecture appears. In both set of works the activation is the quality of the work. Surprisingly even after almost several decades after their first design, the Schreitbahnen seem to remain fresh and undated. This is like a miracle to me.
www.galeriewolff.com