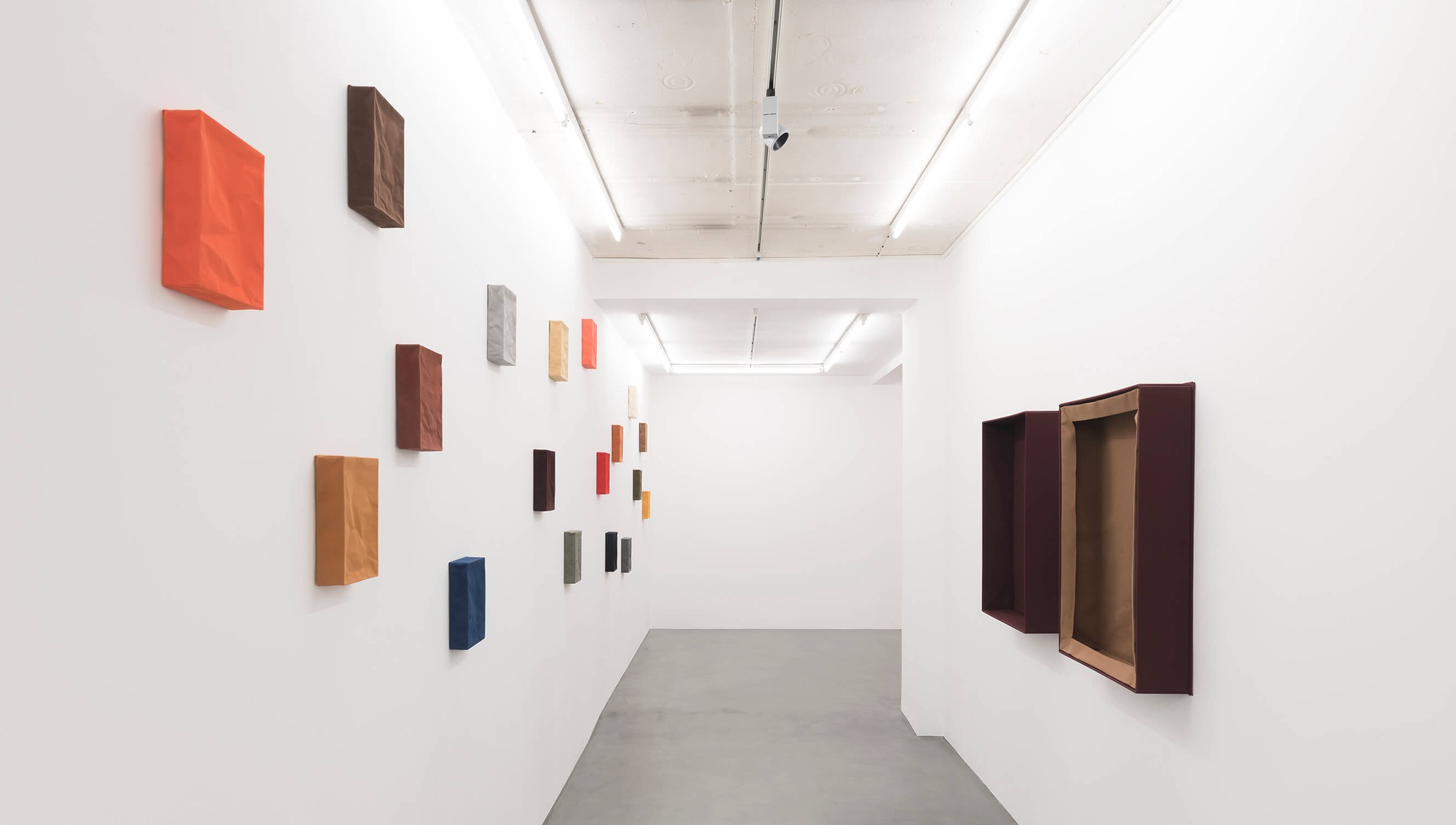 Notes from a conversation between Franz Erhard Walther, Susanne Walther and Jocelyn Wolff on October 16th 2018

"Sockel-Standstelle UMWANDLUNG, (1970, executed 2018)" needs a site and a direction: when you step on it, you relate to the word engraved in it with a specific font that I designed. This simple plate of metal becomes a pedestal when a person is on it, who then can see herself as a sculpture.

I started using fabric in the early 60’s (1963) specifically because this technique at the time was not used in the field of art and was seen as belonging to that of craftsmanship. It gave me lots of freedom, especially when I started working with sewn fabrics, thanks to Johanna (who also realized all the works here in the show) and was no longer gluing fabric as I did a few years before, a technique referring to collage, which did not fit with my intentions.

As the show states, everything with me starts with drawings: I conceived approximatively a hundred Wall Formations between 1979 and 1986. When I started this new series of works, soon after the Stride Pieces in metal, it was not planned that it would become such a large and central group in my work. The reception of this group was difficult at the time, and I had to fight for it (because of the Werksatz diffusion mostly). Wall Formations use the body as a part of their formulation, not the body as a work. They are centered around this idea that they work as a sculptural image when you face the work, but when you step in it it becomes a kind of pedestal in the wall.

All Wall Formations are participatory works and body-related in terms of proportions. They basically remain fragments that you complete by imagination or stepping in it.

I also would like to add that the drawings of the show were not meant as works: for me they are rather an implement, they became such as the Workdrawings of the Plandrawings.

For this show, in addition to Susanne’s initiative to execute the non realised Wall Formations I found also interesting her idea to integrate “Wandgesang (1990)”, a multiple, that gathers as a library of samples all the colors I use (except the natural cotton) in the Wall Formation and the Configuration series and other workgroups.

Previously exhibited on the floor in Herford, “Two Box Shapes, Inserted Sculptural Frame” is a little bit the “chainon manquant” between the Wall Formation group and further work groups to come...
www.galeriewolff.com