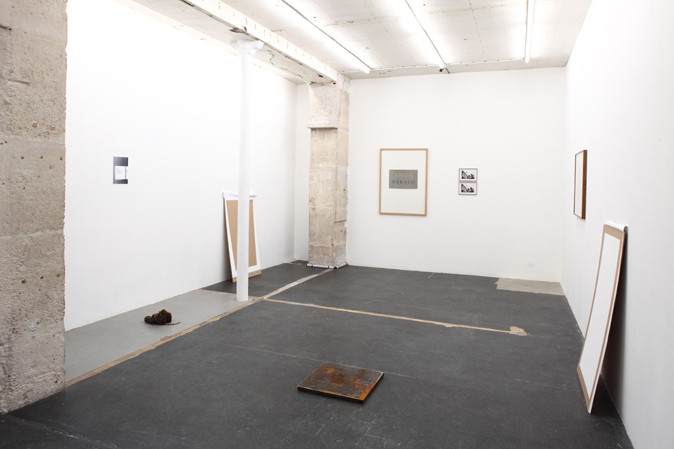 The idea for this exhibition came about in the mist of a discussion about the place Franz Erhard Walther should have occupied in the history of Conceptual as well as Preconceptual Art. Although it has been the subject of reevaluation during the last twenty years, Conceptual Art does prove to be more and more difficult to delimit, whether it be in chronological, geographical or esthetic terms. In line with Thierry de Duve, certain historians went as far as to say that it “didn’t exist”: “I would say there is no such thing as Conceptual art. It doesn’t exist. It’s just a name.” Understandably, this difficulty reflects upon the study of its roots, which were often neglected or bypassed by the specialists, who were undoubtedly cautious of the idea of registering Conceptualism within the continuity or proximity of partially incompatible tendencies (Fluxus, Minimal Art, Concrete Poetry).
Taking into consideration the official chronology that makes the conceptual movement start in 1966 with the exhibition (Working Drawings and Other Visible Things on Paper not necessarily meant to be Viewed as Art) curated by Mel Bochner at the School of Visual Arts in New York, the selected works and proposals for our exhibition date prior to this and always deal with one or some criteria that thereafter became inextricable from Conceptual Art. The importance the artists placed on processes (William Anastasi, Stanley Brouwn, Yoko Ono) and instructions (William Anastasi, Stanley Brouwn, Yoko Ono), on dematerialization (William Anastasi, George Brecht, John Cage) and tautology (William Anastasi, Peter Roehr), on questioning the author’s status (Stanley Brouwn, Yoko Ono) and on language (George Brecht, Heinz Gappmayr, Peter Roehr, Franz Erhard Walther) indisputably announce the founding principles of Conceptualism. And if it is not about claiming that they adhere completely, the inherent prodromic dimension turns out to be convincing. In an effort to remain loyal to the mindset carried by a certain few of these works and to avoid any vintage qualities that could prove undermining, we decided to opt for the standpoint that consists in adapting them to contemporary technology. It is from within this perspective and following a conversation with William Anastasi that his two essential pieces (Sink and Microphone), whose conception dates the first third of the 1960s, became “updated”. The integration of propositions from young artists (Guillaume Leblon, Elodie Seguin, Christoph Weber) from the gallery, which appear as veiled references to other, major, protoconceptual figures (respectively Yves Klein, the On Kawara before the date paintings, and Robert Morris), demonstrates how the after can take a critical look at the before in a way which is as singular as it is vitalizing.