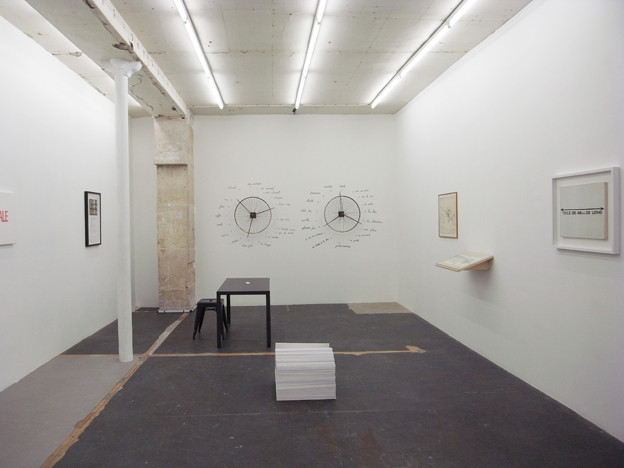 The second chapter of the exhibition dedicated to artists prefiguring the conceptual phenomenon, 8.01.2011-05.03.2011 is chiefly centered on linguistic practices.
Receptive to a playful and mischievous dimension, the language of Robert Filliou is submissive (of which the Danse-poème nods in the direction of Duchamp).
With a random and interactive perspective, Ludwig Gosewitz and Tomas Schmit allow the viewer(s) and reader(s) to put the finishing touches to the artwork. This sharing of the responsibilities weakens the status of the author, which, in the 1960s, was questioned more than ever.
In the Toile de 45 cm de long by Ben Vautier, the artist treats this interactive dynamic from a different angle. The numbers and letters reveal themselves through a form of participation and take on an intention of the tautological order: the word and the thing forming one and only one entity, a canvas 45 cm long.
The aim of Barrie Bates is noticeably different. Well before working under the identity of Billy Apple (“conceived” November 22, 1962), Bates produced polygraphic works in the beginning of the 1960s, that were frequently inspired from everyday activities (and not “performances”), associating texts and images.
On another register, For sale (1961) seeks to circumvent advertising and merchandising codes and straight-forwardly asserts the mercantile dimension of the artwork, announcing with this the often ambiguous relationships woven by conceptual artists with the art market and marketing strategies

As for the work of Franz Erhard Walther, the 100 Mittellinienzeichnungen (“one” median line spread over a hundred cards) can never be viewed in its entirety – the displacement of the viewer involves a discontinuous, almost jerky movement, (de)composed of multiple moments that follow one another – and evokes the lines of Manzoni, without their invisible character.
As with this major figure of pre-conceptual art, it is the viewer that must make the projection of one line in order to bring relief to the idea of a “spatial extension”, which to use the wording of Benjamin Buchloh in regards to the Italian, “n’est plus accessible, si ce n’est conceptuellement”
At last, it seemed pertinent to us to associate this simultaneous work as a tribute, to call it such, by Walther to his colleague, as well as a work by Katinka Bock, which, in revealing a same inaccessibility, shows as a result that certain questions posed by Manzoni have not lost their pertinence in today’s world.

1 Refer to this title of the work by Alexander Alberro, Conceptual Art and the
politics of publicity, MIT, Cambridge, 2003.