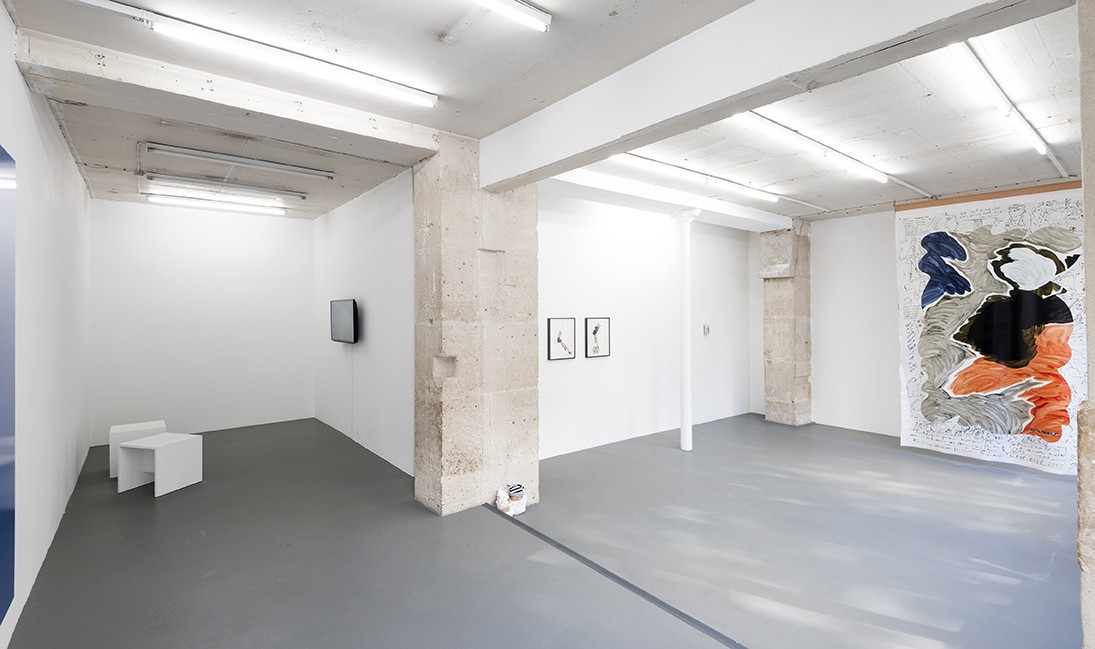 The group exhibition IN MY ABSENCE, curated by Dorothea Jendricke, brings together works of six contemporary artists in a variety of media including sculpture, film, collage and painting.

Lynn Hershman Leeson (b. 1941 in Ohio, USA) has been concerned with ideas surrounding the relationship between the body and the machine, between humans and technology since the 1960ies. In context of this investigation into the authenticity of identity Hershman Leeson also performed regularly as an alter ego persona, Roberta Breitmore, between 1973 and 1978. She hired a detective to follow this character around, documenting her every step, and created several works relating to the life and emotions of Breitmore.

While she was forecasting contemporary political issues of surveillance and censorship, the matter of absence has played a critical role in her 2010 film project !Women, Art, Revolution, a documentary about the historic absence of women’s art in American museums.

Plugged and Call Me, exhibited here, both from 1987, are part of the series Phantom Limbs. Created between 1985 and 1987, this series of collages and prints merges female body parts with technical equipment such as wires, monitors or camera lenses.

Canadian artist Rosa Aiello ́s video work Serving, 2015, is shifting between real world scenario and an illusionary space of the mind. The used footage from a surveillance camera in Mississauga, Ontario (Canada) reveals the scripted cinematic and comedian quality of a theft, this blends in with a hyper-real narrative set in an abstract and surreal animated scene. Aiello was born 1987 in Ontario and grew up there.

The etching Ocean III from 2015, by Anne Imhof (b. 1978, Germany) is a component of Imhof ́s latest performance DEAL, which was commissioned by and premiered at MomaPS1 in New York earlier this year. DEAL manifests the artist ́s research into various physical transactions. These can be formal and informal, as well as legal or illegal. Imhof sheds light on peer group codes and investigates structure of power hierarchies. She enables her works to unfold in multifaceted form, not limited in space, nor determined in time. Sculptures and installation elements are initial part or can be created while performing. They are equally contributing to the work as the performance event itself and extend the performative space. The physical traces on Ocean III, a large Lamborghini blue aluminium panel, are scratches performed in the artist studio by Imhof herself. Though may be reminiscent of the public life event of DEAL performed. Imhof ́s work SOTSB was performed at Centre Pompidou on 3 July, 2015, in context of the Pompidou ́s Noveau Festival.

While living in Los Angeles in 2013-2014 Lucie Stahl (b. 1977, Germany) started collecting bleached out aluminium cans of Bud and Coke in the nearby desert and turned them into a series of Prayer Wheels. Stahl ́s works repeatedly draw on recent pop-cultural imagery from advertising, Hollywood cinema and television. With the washed and bleached off, dented surfaces the Prayer Wheels, as descendants of Tibetan religious tools, raise particular questions about consumerism and hint at strategies to cope with overwhelming global politics. Circling ideas about the object and it ́s identity itself. Stahl looks at the relation between surface, representation and the physical manifestation.

Similarly Morag Keil (b. 1985, Scotland) is referring to the body and its relationship to established social structures. Keil ́s Flour Babies are little sculptures made of flour bags and baby clothes that might refer to a 1992 novel by the same title. There the American author Anne Fine describes a school experiment where troubled young adults are given flour babies to look after for a defined period of time. Sharing their lives with them, and taking care of the little freaky creatures she describes how young people grow to reflect on their own social environment and overcome anxieties. Keil looks at the construction of identity and it ́s interpretation, relating to a late capitalist social state. And with Flour Babies, in a humorous way, she lifts patterns of perception.

One notation on the front of Helen Johnson ́s painting Marginalia, 2015, reads: “KANT thinks he can separate adornment from art. DERRIDA says – nope. (or, can you? Really?)”, while on the backside Johnson suggests: “READY FOR NEW CHALLENGES - KEEN TO PURSUE OTHER OPPORTUNITIES - EXCITED TO EXPLORE NEW POSSIBILITIES.” The double-sided work is even more layered and dense than her previous paintings. Johnson (Australian, b. 1979) inhabits her paintings with a subtly comic register, using cartoony elements as well as using writing of notations on the canvas, front and back. A spinning and witty, ingenious network of resources is revealed. Marginalia also comes along with very destined Australian references that Johnson confronts an audience from elsewhere with. Some of these references can be lost on the viewer ́s eyes some make a connection, opening a new conversation. As part of her ongoing research into the capability of painting Johnson just recently published a book titled Painting is a Critical Form.

Looking at subtle and empowering forms of resistance and critique, IN MY ABSENCE is taking a passage from What Would Lynne Tillman Do? ́s chapter F is for the Future as a point of departure.
In her omnivorous collection of texts, published 2014 in New York, Lynne Tillman writes about early encounters with the computer technology “... while you seem to be homing in on or sensing the infinite, “accessing” an infinite variety, inundated with choices, threads and threads, you can feel powerless or powerful, depending upon how you navigate in a ocean/notion like, the infinities in a machine on your desk. Some people might develop a cortisone-type high, imagining everything in the machine is them, they can master the course/ship; others will get lost at sea, devastated by how much they can ́t do. I have both feelings. (You know I question the idea of access anyway.) Remember when I bought my computer years ago and fell in love with the delete key, wanted to delete everything.“

We would like to thank Chatteau Shatto, Los Angeles, Bridget Donahue, New York, and Deborah Schamoni, Munich for their generous support.
www.galeriewolff.com