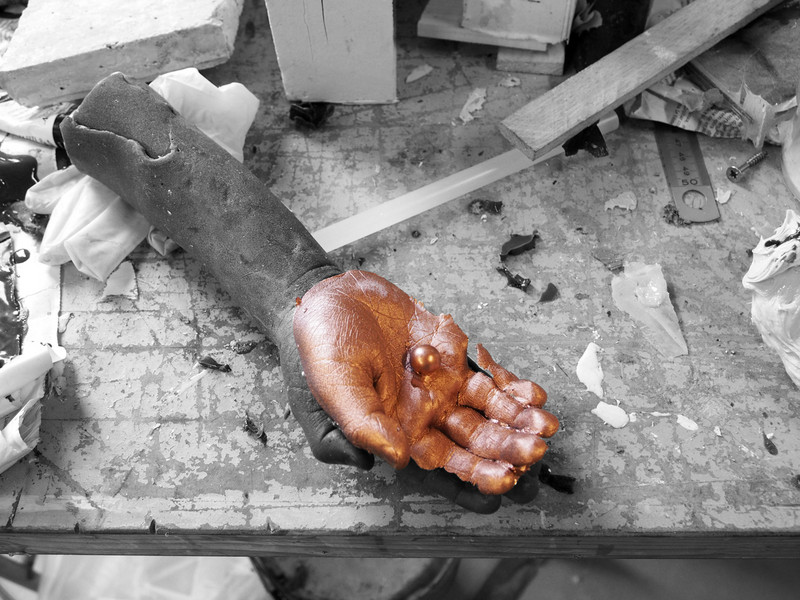 For this most recent exhibition, Galerie Jocelyn Wolff proposes artist Guillaume Leblon to improvise a dialogue with the work of Miriam Cahn. La nature et ses proportions draws attention to a repertoire of gestures that activate the mutuality in the way of seeing, attentive to a same horizon, during the act of creating. Encounter, connections, uncertainties: the dialogic format of this exhibition is animated by the interest Guillaume Leblon takes in the work of Miriam Cahn. From Latin curare, which means “to heal”, “to take care of”, it is less a question of “curator” than the hospital circumstances involved in the exhibition, a presentational logic that favors and welcomes the meeting, a certain fruitfulness in the dialogue.

From nature and its proportions, there really only remains a few traces and imprints, those from a time conjugated in the future perfect, bringing to mind the collision of two states of nature in the material. These are so many virtual, ghostly, hollowed out presences that occupy the space. In an archeological approach, Guillaume Leblon presents traces of a fertile aquatic life, a world burrowed under water that rises to the surface. From the abyssal zone to the fish bowl, the gallery space evokes the passing and the retreat of the sea, water being here the active principle and agent dissolving shapes into memory. The artist voluntarily cuts the space with rigid curtains, dipped in plaster, which organizes the visitor’s discovery of the space: Le Grand Rideau masks the openings and, at the same time, designates what is to be viewed with a pointing index finger, while an Isoloir carves the room’s recess. The bas-reliefs evoke the tentacular movement of a cuttlefish and the swelling of organic matter in La Grande Seiche; with Laitance, a sole, in which there ironically remains only a fertilizing liquid dried to the surface of the plaster, evokes the opaline qualities of the seminal substance secreted by fish during spawning season; a fossil fish that blinks as well as a suspension of perishable objects (fish, fruit, a hand like a pictorial and sculptural tool) entitled Le Secret; and this is placed in relationship to a selection of drawings and paintings by Miriam Cahn where again we find an interest in landscape, burrowed figures and their erotic, sexual nature.

Here the sculpture’s gesture is reduced to its minimal function, a simple pressure, contact with the material. In spite of the set nature of the imprints, it is the idea of movement – a struggle perhaps – that gives itself up to both the mode of survival and the relic. Guillaume Leblon’s practice operates at the crossroads between imitation, likeness and reproduction; he endeavors to collect natural forms, directly deducting them from the world rather than inventing their outlines.

We also find a certain voluntary imprecision of outlines in the series of drawings by Miriam Cahn, titled klassich (1994), in which the pornographic nature echoes the fertile material seized by Guillaume Leblon. These sketches show many bodies – first two, then three – entangled, emerging in a series that evokes a progression, a movement. La nature et ses proportions also includes those mountain landscapes abundantly visible in the work of Miriam Cahn as in the large format painting titled urzustand (2003) to which the small format painting titled nach dem Schnee (2004) responds.

Guillaume Leblon questions the impossible perpetuity of forms: what remains of the movement of a body? Can an imprint preserve something of this fertile and organic life? Running counter, against time, pressing forms into material so to reveal, in the epiphanic sense, movements of a body, a substance: these are as much gestures of conservation as preservation within the artist’s work.