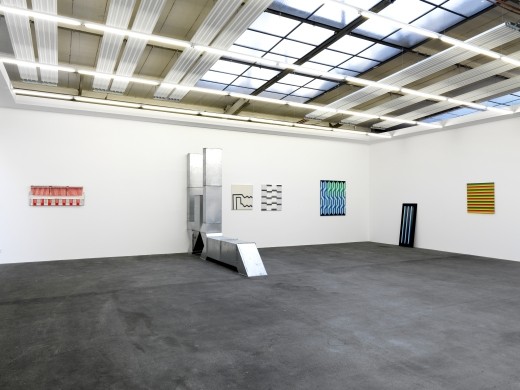 Thomas Bayrle (*1937) is considered to be one of the leaders of the Pop art movement in Germany. Both his pictorial motifs and the seriality as his central formal principle reflect modern consumerist culture as an accumulation of multiple and repetitive forms. In this sense, Bayrle creates his so-called super-forms in serigraphs that consist of a compilation of identical forms and pictograms, such as cups, cans or shoes, merged into a unified picture. Bayrle’s work thus describes a world suspended between positive collectivism and deadening uniformity.

Bayerle lives and works in Frankfurt/Main since the 1960’s where he is professor at the Städelschule since 1975. His works were featured in numerous exhibitions such as documenta III (1964), documenta VI (1977) and the 53rd Venive Biennial. Museum exhibitions were held Museu d’Art Contemporani, Barcelona (2009), Musée d’art Moderne et Contemporain, Geneva (2009), Museum Ludwig, Cologne (2008) amongst others.

Little known artist Axel Dick (1935-2006) was mainly working as an art teacher in Braunschweig after his studies at the art academy (HfBK) Berlin (until 1960). Simultaneously however, he was creating graphical, painterly and sculptural work. Influenced by two stays in the US, Dick started pursuing the aesthetic concepts of Op art whose first protagonists were Victor Vasarely und Jesus-Raphael Soto in the early 1950’s. Dick’s so-called light-programs were partly sculptural paintings of precisely arranged and nuanced color stripes, aiming at an association of energy and light.

Before considerably reducing his artistic work in 1979 Dick had several exhibitions in German, mostly local galleries, among them Rolf Glasmeier’s studio gallery (1974, 1976). In the 1990’s he took up creating works that have been featured in some group exhibitions in the 2000’s.

After an apprenticeship as a typesetter Rolf Glasmeier (1945-2003) studied visual communication at the School of Design Ulm while living mainly in Gelsenkirchen where he was based for the rest of his life. Like the concrete art of the 1960's, the notion of structure played a key role for Glasmeier's artistic practice. Apart from early drawings and prints this lead to his so- called Kaufhaus-Objekte (department store objects). These were wall objects with serial rows of industrial products such as door handles or curtain rings, partly available for the viewer to interact with. With those works Glasmeier presents an ironic take on the concrete art's formal severity, reflects the serial structure of the modern world of objects that he renders into a playful experience for the viewer.

Glasmeier gained plenty of awards, among them the first price for sculpture at the 6th Paris Biennial in 1969, followed by the Villa Massimo Price in Rome. After numerous contributions to international group exhibitions he had solo shows at the Neue Sammlung, Munich, the Folkwang Museum, Essen and an extensive restrospective in 2008 at the Museum for Concrete Art and Design, Ingolstadt on the occasion of his estate's surrender to the museum.

Manfred Kuttner (1937–2007) initially studied at the art academy in Dresden until 1961 when he left the GDR. Following his relocation in the west, he studied at the art academy in Düsseldorf with Karl Otto Goetz, alongside Gerhard Richter, Sigmar Polke and Konrad Lueg. Like the latter Kuttner also suspended his career as an artist. Within a period of only four years (1961-1965) he accomplished an oeuvre with a form language of his own, comprising mostly painting, drawing and sculpture. Kuttner used the then newly available fluorescend paints for his abstract, ‘kinetic’ compositions on canvas, old curtains and other fabrics, but also to coat daily objects with.

Amongst others, Kuttner's earlier work was shown in the exhibition The artist's dining room (2007) at the Tate Modern in London (together with works of Anselm Reyle and Thomas Scheibitz) followed by a solo exhibition at "Westlondonprojects", London.

Charlotte Posenenske (1930-1985) started her artistic career in the beginning of the 1950's when studying at the art academy in Stuttgart with Willi Baumeister. In addition they worked together as set designers in Darmstadt near of Frankfurt/Main, where Posenenske became a close friend of Thomas Bayrle and the artist Peter Roehr. From 1966 she created her sculptural works from industrial elements such as square pipes that were supposed to be combined differently with each installation. In 1968 Posenenske abandoned her artistic practice to devote herself to the study of sociology and social projects when having come to the conclusion that art ultimately cannot have sufficient political impact. Although she withdrew completely from the art world her work subsequently had a strong impact on concept art during the 1970's due to the variability of objects, the participation in production, the inclusion of a specific situation, a social context and institutional critique.