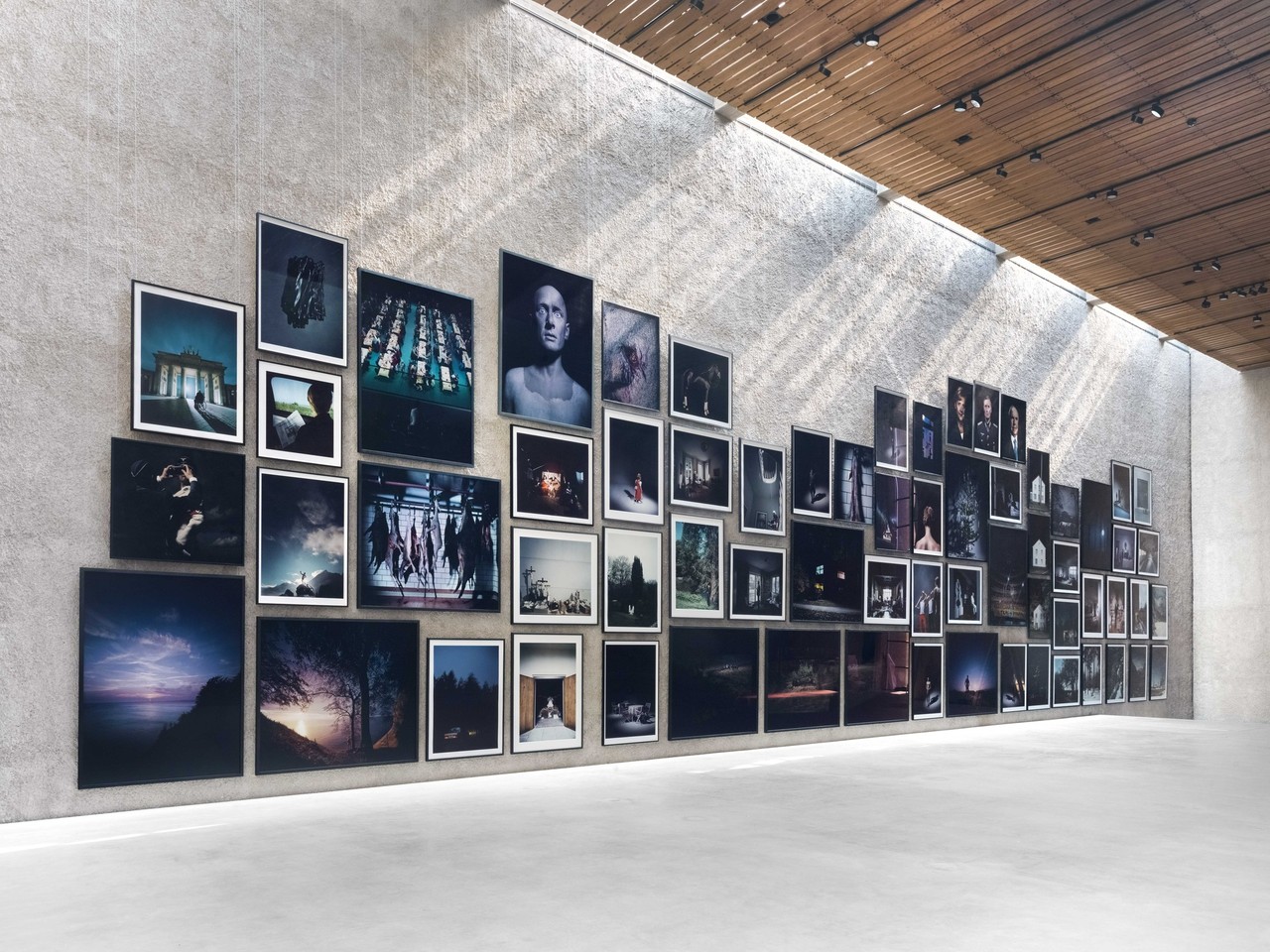 Andreas Mühe declares "whoever controls images controls reality”. Along with determining what is, and ought to apply, power lies at the very centre of what it’s all about. It’s about determining which images show certain motifs at certain points in time; how they show it and who the audience is. Andreas Mühe (*1979, Karl-Marx-Stadt) is a master of compressing these underlying mechanisms into the picture frame, and of tracking down both conscious and subconscious ideologies while simultaneously re-enacting them in a way that is uncompromising and subversive. Subversion is a disruptive reshuffling of power; it is the attempt to overthrow the assumed order, comparable even to a self-imposed state of emergency. The constitutional lawyer Carl Schmitt explained that the term ‘sovereign’ — powerful— refers to those who make decisions in states of acute emergency. He put forward that power belongs to those who determine a valid legal system and dismiss possible alternatives. Applying this widely known dictum to the art of Andreas Mühe, the following can be said: “the individual who intentionally captures that state of emergency within a picture frame and undermines it, is precisely the one to subvert, question and shake power”. This is what Andreas Mühe’s work transmits — it is his continuous goal to destroy the power of images in the eye of the beholder, to implode expectations, reshuffle preconceived orders and fields of meanings. He seeks to expose propaganda and a trigger all-encompassing questioning.
Mühe’s photographs are meticulously staged and shot with an analog large-screen camera — with the goal to subvert, they continuously strive to show states of emergency and highlight exceptions to prevailing notions of implicitness. At times, minimal and subtle hints achieve an effect of maximum shock in the beholder. We see Angela Merkel lost in thought, standing under a tree in the midst of greenery by a body of water — and suddenly she is transformed back to the young, dreamy girl from the Uckermark (Unterm Baum, 2008).
Covering a time span of about fifteen years, the exhibition Subversive Praktiken collects central works by Andreas Mühe from all relevant work cycles, such as ‘Obersalzberg’, ‘Neue Romantik’ or ‘A.M. - Eine Deutschlandreise’. We see self-absorbed Nazis in the picturesque ambience of the Berchtesgadener Land, we see Dresdener Ultras ecstatically celebrating their support in the Semperoper (The Huguenots I, 2017).
Seemingly romantic landscapes repeatedly catch the eye — the German forest is depicted as a myth (Gespensterwald, 2015); the chalk cliff (Kreidefelsen, 2014) shows a masterful, harmonious play of light and shadow. One is reminded of Caspar David Friedrich, however, nothing here is naive or exalting. Neither Obersalzberg nor the idyll of the lonely hunting lodge of Erich Honnecker can be viewed as such. Romanticism is starkly broken away from precisely through the radical use of ‘romantic’ agents.
Considered in its entirety, the body of photographs shows a subtle yet disturbing moral portrait of what, in the broadest sense, can be called ‘German’. Taking this thought a step further even, Mühe can be seen here to achieve a type of complex family constellation, as it is used in psychology to analyse family relationship patterns — in both cases it’s about dealing with one's own system of origin.
Thus, the beholder involuntarily finds him/herself in a prominent position within the exhibition space of Subversive Praktiken. All around him/her, the principal protagonists of all our lives are grouped into the photographs — just as in the family context, one can hardly deny the followings’ effect on our individual existences: Angela Merkel, Helmut Kohl, Thilo Sarrazin, Erich Mielke, Bushido, Richard von Weizsäcker, the Christmas tree, the refugees.
Andreas Mühe succeeds in creating a double state of emergency. As an aesthetic instrument of rupture, inconsistency and deconstruction, this is omnipresent in all his photographs. Simultaneously, the beholder is immediately impacted by this condition when facing the high-rising assemblage of the works, which one can hardly pass by indifferently. Along with reconsidering hierarchies and authorities, the beholder is encouraged to stumble over apparently self-evident actualities. Andreas Mühe implants states of emergency into minds — this is the subversion in his art.